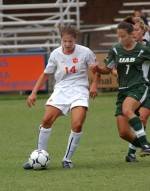 Boston College improves to 7-0-1 overall and 1-0 in the ACC. Clemson falls to 5-3-2 overall and 0-1-1 in league play. The Eagles are ranked eighth by Soccer America and ninth by the NSCAA.

Clemson scored early in the first half. Allison Graham sent a corner kick into the box. Britten Meyer header hit the cross bar and Kelly Schneider knocked in the rebound from close range for her second goal of the season.

Boston College tied the score early in the second half. Caitlin Burke played the ball to Kia McNeill on the right. McNeill sent a looping shot from just inside the box on the right side from 14 yards out at a severe angle to the left wall of the net for her third goal of the year.

McGregor scored the game-winner with 13:20 left to go in regulation. Jenny Maurer dribbled the ball into the box. She sent a pass to the middle to McGregor who sent a shot from 10 yards out into the middle of the goal for her first goal this season.

“This was a tough loss,” said Clemson Head Coach Todd Bramble. “Mentally we played not to lose rather than be aggressive and play to win. As a team we will have to regroup and prepare for the number-one team in the nation, North Carolina this Friday night.”

Clemson will play at number-one ranked North Carolina in Chapel Hill, NC on Friday, September 30, at 7:00 p.m. in the Lady Tigers next action.