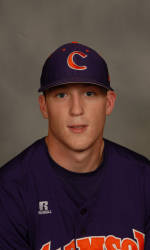 The #19 Clemson Tigers scored eight runs on eight consecutive hits in the third inning en route to an 11-3 victory over UNC Wilmington in front of 4,885 fans at Doug Kingsmore Stadium on Saturday night. The Tigers, who took a 2-0 series lead, improved to 34-16, while the Seahawks dropped to 25-19.

After the first Tiger was retired in the third inning, the next eight batters combined to tally two homers, three doubles, and three singles during the rest of the frame to break the game open. It was Clemson’s highest-scoring inning of the year by two runs.

Clemson starter Casey Harman (6-3) pitched 6.0 strong innings to earn the win. The sophomore lefthander allowed six hits, two runs (one earned), and one walk while tying his career high with nine strikeouts. Justin Sarratt and Will Lamb combined to pitch the final 3.0 innings, allowing one run on three hits. UNC Wilmington starter Cameron Roth (0-2) suffered the loss, as he gave up nine runs on 11 hits in 2.1 innings pitched.

The Tigers took the game’s first lead in the first inning with two runs. Mike Freeman lined a one-out single to left field and scored on Jeff Schaus’ double to left-center. Ben Paulsen followed with a line-drive single to center to score Schaus.

Clemson added to its lead in the second inning without the benefit of a hit. Jason Stolz led off with a walk, moved to second on a wild pitch, and advanced to third on Chris Epps’ sacrifice bunt. Stolz then scored on a balk by Roth, giving Clemson a 3-0 lead.

In the third inning, Clemson scored eight more runs on eight consecutive hits to build an 11-0 lead. Kyle Parker hit a long solo homer to center over the “batters’ eye.” It was his 11th long ball of the season. Boyd followed with a double to left-center and scored on John Nester’s double to right-center on an 0-2 pitch. Brad Miller hit Clemson’s third double in a row when he lined a two-bagger to left-center to score Nester. After Miller stole third base, he scored on Stolz’s single through the left side. Epps then slapped a single down the right-field line to move Stolz to third. Epps’ single meant that every Tiger starter had at least one hit before the end of the third inning. Freeman kept the rally going with a single up the middle to score Stolz, then Schaus belted an opposite-field, three-run homer to left-center. It was his 10th home run of the season and Clemson’s eighth hit in a row in the frame after the leadoff batter was retired.

In the sixth inning, leadoff batter Andrew Cain reached on a fielding error by Miller at short. After Monday drew a one-out walk and King struck out for out #2, Michael Rooney singled through the left side to score Cain.

Monday hit a solo homer to left-center in the eighth inning. It was his 11th home run of the season.

Schaus paced Clemson’s 14-hit attack by going 2-for-5 with a double, homer, four RBIs, and two runs. Freeman, Paulsen, Boyd, and Nester also collected two hits apiece for the Tigers, who were 7-for-9 with runners in scoring position in the game.

Grayson Evans and Monday had two hits apiece to lead the Seahawks, who had nine hits in the game.

Clemson and UNC Wilmington will play the series-finale of the three-game series on Sunday at 1:00 PM. The Clemson seniors along with all the Tiger players’ parents will be introduced prior to the game.