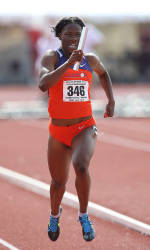 CLEMSON, SC – Clemson qualified eight individuals and both women’s relays for the outdoor national championship meet on Saturday, the final day of the NCAA East Preliminary Round in Jacksonville, FL. Over the three-day meet, Clemson had 13 different student-athletes qualify for NCAA Nationals in at least one event. Marlena Wesh stormed from third place in the final leg of the women’s 4×400 relay to lead Clemson to victory and an NCAA bid to cap the meet for the Tigers.

Brittany Pringley got the Tigers off to a strong start in the 4×4, but Clemson fell behind after the second leg and was in third place when Wesh got the baton. She rolled off an incredible 50.78 split on the final leg to blow by Florida and take the third quarterfinal with a season-best time of 3:33.14. The other two legs belonged to Dezerea Bryant and Whitney Fountain.

Four out of five females advanced for Clemson in the high hurdles, including two-time indoor All-American Brianna Rollins and reigning ACC champion Bridgette Owens, who had the best time of the quarterfinals at 13.01. Rollins ran 13.04, Keni Harrison 13.06 and Monique Gracia posted a time of 13.29. Gracia and Harrison both qualified for NCAA nationals in multiple individual events.

Spencer Adams and Marcus Maxey were both impressive in the second quarterfinal on Saturday. Adams won the heat with a time of 13.47, his second-best this season, while Maxey produced a personal best 13.74 in finishing ninth overall in the round. Maxey’s time moves him to ninth on the Tigers’ all-time performance list.

Bryant moved on in the 200-meter dash, giving her a third NCAA qualification in an individual event as a freshman in 2012. She was an indoor All-American in the 60 and 200 and ran a personal best 22.97 on Saturday. Prior to the running of that event, she ran third leg for Clemson’s victorious 4×100 relay in its section. She teamed with Fountain, Wesh and anchor Jasmine Edgerson for a time of 44.12.

April Sinkler made her third and final event count, as she qualified for the NCAA Outdoor Championships in the triple jump a third consecutive year. Sinkler is a six-time All-American and has qualified for six NCAA meets in her decorated career. She hit a mark of 43’6″ on her second attempt Saturday.

Kim Ruck made one final attempt to qualify for nationals, running 5000 meters two days after completing the 10K in 15th place. She was 21st on Saturday with a time of 16:43.70 and closed out her career as one of the Tigers’ best distance runners in recent memory.