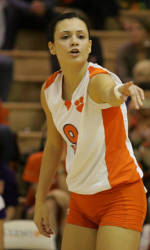 Senior Istanbul, Turkey native Didem Ege entered the match needing six digs to break the ACC career digs mark of 2,238 set by North Carolina’s Brittany Eskola only a season ago. After recording only four in the first three sets, she saved 14 attacks in the fourth set to set the career mark, and ended the match with 2,251 career digs.

The Tigers used overpowering offense for much of the night, hitting .292 or higher in each of the four sets. For the match, Cansu Ozdemir recorded her first career double-double with 10 kills and 10 digs, and also added three service aces.

Proctor had her 13th double-double of the season, registering 15 kills and 10 digs. Sandra Adeleye continued her hot hitting, registering 15 kills against only one attack error in 24 attacks for a .583 mark. She also had four total blocks and five digs in the match. Natalie Patzin also added nine kills in the win.

In total, the match saw 35 tied scores and 14 lead changes between the teams, who are clawing toward an NCAA tournament berth.

Clemson took the first set handily, 25-16, and hitting .438 in the set. Lia Proctor, coming off her ACC Player of the Week honor opened with six kills in the first set. Cansu Ozdemir three. Murphy had 13 assists in the set as well.

Virginia Tech struck back in the second set, hitting .344 on their way to a 25-20 set win. Ege didn’t record a dig in the set, but Adeleye kept the Tigers in the set with four kills in as many attempts.

The Tigers fought back in the third set, taking an 11-7 lead on an Adeleye and Patzin block. The Tigers held on to the edge throughout the set, winning on a block by Rand, one of her four on the night. With an 18-16 lead, Clemson went on a 7-2 to win the set and take control of the match.

Clemson needed extra points to clinch the match, as Virginia Tech fought back from a 24-21 deficit to tie the match at 24 and then take a 25-24 lead. However, Clemson responded with a kills form Proctor to tie the match, a block from Rand and Patzin to take a 26-25 lead, and a Felicia Willoughby attack error sealed the match for Clemson.

Clemson returns to action on Saturday at 7:00 pm after the football game as they take on the Virginia Cavaliers, who fell on the road in three sets to Georgia Tech on Friday night. The Tigers will then play host to the Yellow Jackets on Friday, Nov. 27 at 5:00 pm to close out the 2009 regular season.