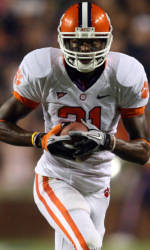 The John Wooten Leadership Award is presented annually to the college and professional football player whose play, community and extracurricular activities best exemplify the leadership and vision of John Wooten.

Dye, who received his undergraduate degree on Thursday, is a four-year letterman on the Clemson team who was named to the All-State Goodworks team of College Football last year. He has been very active in community service throughout his career.

The JWL Award is named in honor of John Wooten, whose NFL career has spanned over 50 years as a player and front office executive. Affectionately known as the “Godfather”, Wooten’s level of influence knows no bounds and his blessings (endorsement) can build a career. Commissioners, general managers and head coaches seek his advice and to gain his counsel is the key to gaining knowledge and insight that is virtually unparalleled in the NFL

Dye and the other two finalists will be honored Thursday, February 3, 2011 at the Hyatt Regency Reunion Hotel in Dallas, TX as part of the Super Bowl XLV festivities. The winner will be announced that night, along with the recipient of the NFL’s Fritz Pollard Award.