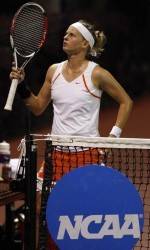 ATHENS, GA – The NCAA has posted the draws for the 2010 Women’s Singles and Doubles Championships, which begin on May 26 at the Dan Magill Tennis Complex in Athens, GA. Ina Hadziselimovic are a national seed in doubles.

Bek, ranked 17th nationally in singles, will take on 9-16 seed Kristy Frilling of Notre Dame in the first round, a player ranked only one spot ahead of her. She surrently holds a 28-13 overall record, and was an all-ACC selection.

Bek and Frilling met twice last season, with Frilling winning 6-2, 6-1 over Bek in the team Sweet 16 at no. 2 singles, and Bek winning 6-3, 6-4 in the second round of the Singles Championships.

There are 64 players in the singles championship, and Bek and Frilling will comprise one of only two first round matchups of top-20 players. UCLA’s Yasmin Schnack, ranked sixth, will play Baylor’s Nina Secerbegovic (#20).

The two play at 10:00 am on May 26, a match that can be watched live and followed with live scoring on georgiadogs.com. The winner will take on the winner of the Martina Pavelec (Wake Forest, #42) and Kristi Boxx (Ole Miss, #44) match.

In doubles, Bek and Hadziselimovic, who are ranked 7th in the nation, are a 5-8 seed in the Tournament. The pair have won 12 of their last 13 decision, and held a 5-2 lead in the tiebreak set last week against #2 Hilary Barte and Lindsay Burdette. The pair are 24-8 together overall. Hadziselimovic is the school’s all-time winningest doubles player, with 104 to her credit and 34 this season. Bek is 30-13, the fifth-most single-season wins in school history.

Their first round opponent in the 32-team doubles field will be Michaela Kissel and Dominica Zaparanza of Marshall, who are ranked #35 nationally. The two teams will also play on Wednesday with the time to be announced due to some players playing in both singles and doubles.

The winner will take on the winner of the Brittany Blalock and Suzie Matzenauer (Cal Poly, #48) showdown with Csilla Borsanyi and Lenka Broosova (Baylor, #11), which also takes place Wednesday. The second round will be on Thursday.

In the doubles championship, the players will play best-of-three sets to six, as opposed to the pro-set format played throughout the dual match season.

By virtue of the national seed, both Bek and Hadziselimovic have been named All-Americans, the second straight year the two have garnered the honor. Bek was an All-American in singles as well in 2009 when she advanced to the final 16 of the singles championship.

The Tigers’ team season concluded last week with a loss to Stanford, who plays today in the Finals. Clemson finished 24-6 overall and reached the Sweet 16 for the fourth consecutive season.