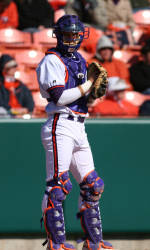 Clemson, SC – Senior catcher Doug Hogan was one of 36 catchers named to the Watch List for the 2008 Coleman Company-Johnny Bench Award delivered by AT&T & Papa John’s Pizza on Monday. The Greater Wichita Area Sports Commission announced the Watch List for the award, which will be narrowed down to 10 semifinalists in May.

The Columbia, SC native is hitting .393 with four doubles, two homers, and five RBIs in seven games this season. He is currently riding a 22-game hitting streak (dating back to the 2007 season), tied for the sixth-longest streak in Clemson history.

Hogan is one of three team captains in 2008 and one of just two seniors on the team. Hogan, one of 11 Tigers selected in the 2007 draft, was taken in the 16th round by the Cleveland Indians, but he elected to return for his fifth season. Hogan red-shirted in 2004 after a standout career at Irmo High School.