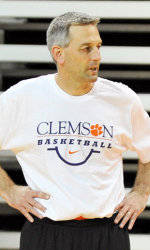 CLEMSON, SC – Dick Bender has been named director of operations for the men’s basketball program. Head Coach Brad Brownell made the announcement Wednesday. Bender, most recently an assistant at Tulane, was the top assistant coach at DePauw University when Brownell was a player from 1987-91.

“Dick is tremendous, he’s just unbelievably loyal,” Brownell said. “He coached me in college and worked for Royce Waltman for the better part of 14 years in two stints at DePauw and Indiana State. Coach Waltman was a mentor to the both of us. Dick has tremendous basketball knowledge, especially with motion offense. Dick is unbelievably organized. He will serve as my chief of staff in terms of running this program. He will keep me pointed in the right direction. He’ll make sure our players are taken care of in a lot of ways. He’s got so much experience in dealing with people. He’ll be a good confidant for me in a lot of different situations.”

Bender brings 24 years of collegiate coaching experience, including 18 at the Division I level, to the Tiger staff. He began his collegiate coaching career at DePauw in 1987 under Waltman. He helped the Tigers to a four-year record of 80-30. DePauw was ranked No. 1 in Division III ranks on two occasions during his tenure. In 1990, Bender helped the Tigers to a national runner-up finish in the NCAA Tournament.

“Having coached Brad at DePauw, I’m extremely excited about being a part of his staff,” Bender said. “We’ve had a good relationship for many years. We’ve remained extremely close. Throughout his career, we’ve called each other for advice. I’m just elated he’s kept me in mind enough to think that I could help his staff at Clemson.”

After his stint with DePauw, Bender served as an assistant coach under Ron Bradley at Radford from 1991-97. The Highlanders compiled the top conference record and non-conference record of all the teams in the Big South during Bender’s four seasons with the program. He was part of the coaching staff that guided Radford to a 73-72 upset over LSU during the 1993-94 season.

Bender left Radford in 1997 and was reunited with Waltman as part of the staff at Indiana State. Bender coached with the Sycamores for 10 seasons from 1997-2007. He helped ISU to consecutive 20-win seasons and NCAA Tournament appearances in 1999-2000 and 2000-01. In 1999-2000, the Sycamores compiled a 14-4 record in the Missouri Valley Conference and won the regular season title. Indiana State then won the MVC Tournament the following season. The Sycamores went on to upset No. 4 seed Oklahoma by a score of 70-68 in the first round of the 2001 NCAA Tournament.

Bender was also part of the ISU staff that defeated perennial power Indiana in back-to-back seasons. The Sycamores defeated the Hoosiers in Bloomington by a score of 63-60 on Dec. 11, 1999, Bob Knight’s final season at Indiana. Then, the following season, ISU won 59-58 with a buzzer-beater at home over Mike Davis’ squad.

The native of Grantsville, MD graduated from Western Maryland in 1986 and earned a master’s degree from DePauw in 1989. He was a two-year letterman and team MVP as a senior at Western Maryland. He ranked third in the nation in 1985-86 in free throw accuracy among Division III players with a 91 percent clip.