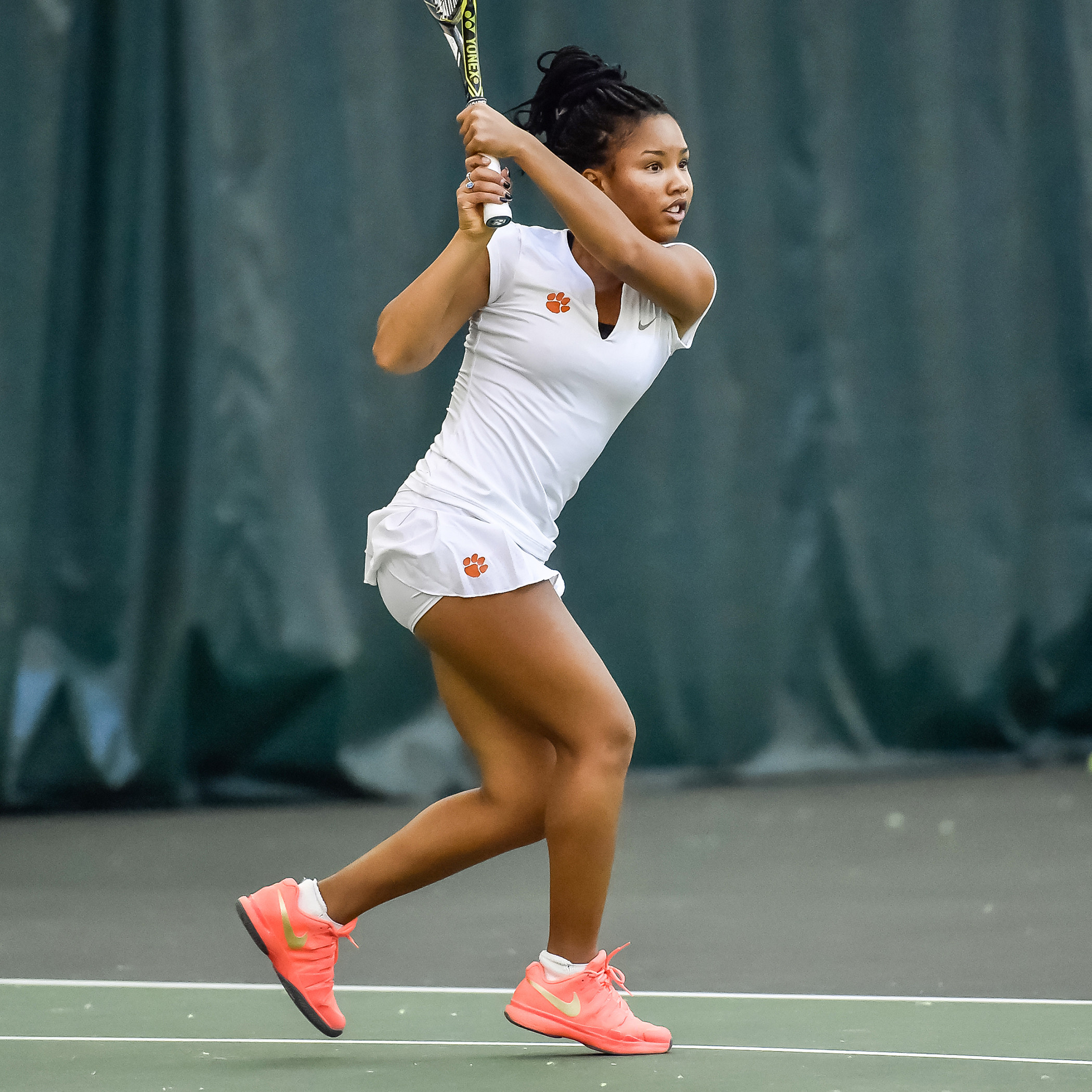 Tristen Dewar has always been one to go above and beyond the call of duty, as she has fostered a strong dedication to the sport of tennis.

“It’s been a great three-and-a-half years and I’ve learned a lot over those years,” said the senior from Bradenton, Fla., prior to the start of the spring 2016 season. “It’s been a fun experience and so many people have been so supportive of me throughout this experience. Everyone in Clemson is really open and friendly, and I’ve enjoyed every minute of being here because of the camaraderie and the family atmosphere.”

Since the age of nine, Dewar found the tennis court and never let go. From that point on, she committed herself to her craft, making tennis a part of her daily life. By the time high school graduation rolled around, Dewar was ranked as a five-star recruit by TennisRecruiting.net and the No. 9 player in the nation in 2011.

During the recruiting process, Dewar had never heard of Clemson and was being pursued by major Division I programs, including the likes of Baylor, Georgia and Miami (Fla.). But a lone connection with an old friend allowed her the opportunity to take a chance visit to Clemson to see what it had to offer.

“When I was first looking at schools, I’d never even heard of Clemson,” admitted Dewar. “I had a friend playing on the team here at the time and she told the coaches about me and they contacted me, but I wasn’t really sure since I was looking at other schools at the time.

“I decided to take a visit here to visit my friend and see the campus, and the coaches were really nice to me, and I loved it. I fell in love with this place, and that was the contributing factor in my decision. The atmosphere is one of support and love, and even though it’s a small town, it’s a great community and you can tell there’s a lot of love here.”

Dewar’s love shined on the court, where, entering the 2016 spring season, she had compiled 70 career singles wins and 58 career doubles wins. In the fall of 2015, she and her partner won the Flight 2 doubles title at the USTA Collegiate Clay Court Invitational in Orlando, Fla.

Some of Dewar’s biggest moments came during her sophomore year, when the Tigers beat No. 1 Duke the day after they defeated No. 7 North Carolina. In the matchup against the Blue Devils, it was Dewar who helped clinch the doubles point, and against the Tar Heels, with Clemson down 3-0, Dewar helped spark a comeback by winning her singles matchup, as the Tigers emerged victorious 4-3. It was during that season that the Tigers were ACC co-champions and Dewar finished with a team-best 29-11 singles record.

But by her junior year, Dewar found the grind of being a student-athlete beginning to wear on her as she became physically and mentally fatigued. The process began to feel repetitive for her, and it certainly led to some challenges in her college career.

“Getting up early and having to do the same thing over and over and over can be a challenge. By the end of my junior year, I remember feeling physically and mentally fatigued. I’ve never had more than a two-day break for the past three years, and the constant travel, playing matches and never really getting a break caused me to burn out. That led to some injuries that carried over to the beginning of my senior year.

“But, it’s mostly the grind that’s the challenge. It’s all in your head, and once you surpass that obstacle and realize that you can do it, you can.”

In fact, it was those injuries that sidelined Dewar for part of the fall of her senior year that allowed her to truly take some time away from the game and provide her with the physical and mental break she never really had the opportunity to have. Despite missing the majority of the team’s fall tournaments because of injury, Dewar returned this spring with a renewed vigor and appreciation for the sport that brought her to Clemson and to where she is now.

If there is one thing she has learned during her time as a student-athlete, it is the importance of rest to motivate and invigorate both the mind and body.

“I realized that in terms taking care of your body and getting as much sleep as you can, taking a break is a part of the recovery process, too. Taking time away from the game can be a good thing, and when you come back, you’re more focused and motivated.

“The injury that I had made me step away from the game on and off for about two months. When I came back, I was more motivated, I enjoyed my time on the court more and there was a big contrast between the end of last season and the beginning of this past season.

“I like to lead by example. I try not to tell people what to do too much…I try to just do it. I try to show that it’s a long journey. You’re going to have your ups and downs, but as long as you work hard on and off the court and keep your head on straight, you’ll make progress.”

In looking back on her time at Clemson, Dewar credits both her coaches and her teammates for the impact they have made, especially her teammates, who each have brought their own brand of experiences with them.

“My coaches certainly have had a positive impact, but one of the greatest impacts has definitely been my teammates. I spend 24/7 with them, and I’ve grown to love and enjoy them.

“Each year we’ve had a different team, although my first three years we had many of the same teammates, and it was only this year that the team has been completely different. My previous team grew to love each other, and even though it was hard getting to know each other at first this year, because we come from all over the world and we’re all so different, we have learned that we’re all in this journey together and have grown to enjoy our experiences together.

“My strength coaches have also really made an impact on me over the past year as well, especially coach ‘Steph’ (Stephanie Mock). She’s always very energetic, and even if something may not be fun, she knows how to make it fun.”

Dewar has shined off the court and has several academic honors to her credit, including the All-ACC Academic team, multiple recognitions on the ACC Academic Honor Roll and ITA Scholar Athlete Award, and most recently, the Clemson Academic Hall of Fame. She is also an involved member of the Student-Athlete Advisory Committee and earned her undergraduate degree in communication studies in December 2015.

Dewar was one of three Clemson student-athletes to earn the Weaver-James-Corrigan ACC Postgraduate Scholarship Award for 2015. She is the second scholarship recipient from the women’s tennis program in consecutive years, as her former teammate, Romy Koelzer, was a recipient of the scholarship last season.

Dewar is set to enroll at Boston University in the fall to pursue a master’s degree in journalism.