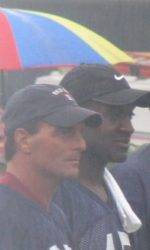 Kinard and Davis were both in the same signee class in 1978, one of the few classes in college football history to have two players go on to make the Hall of Fame. Both were starters and All-Americans on Clemson’s 1981 National Championship team.

Davis took part in various activities at the enshrinement ceremonies over that weekend, including the Flag Football game, which is held on the artificial turn outside the entrance to the Hall of Fame in downtown South Bend on Saturday afternoon. Davis showed he is still in good physical shape by catching two touchdown passes from Hall of Fame classmate Doug Flutie, helping the East team to a victory. Perhaps Danny Ford played him at the wrong position.

“It has been a great year,” said Davis. “From the announcement to the induction ceremony in New York last December, to this past weekend in South Bend. It has made me reflect on my career and all the teammates and coaches who helped me throughout my career.

“The experience was also an opportunity to get to know the other Hall of Famers in this class. To spend time with Doug Flutie and Joe Paterno and many others was something that I will remember the rest of my life.”