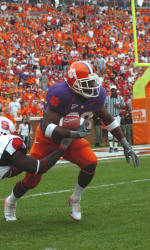 Clemson was the only school in the nation to have two running backs named to the list and one of just eight schools to have more than one player selected regardless of position. Michigan was the only school with three selections, while Clemson was joined by West Virginia, Southern California, Wisconsin, Texas, LSU, and California with two apiece. Matt Ryan, quarterback from Boston College, was the only other ACC player on the list.

The Walter Camp Award will be announced on the ESPN/Home Depot College Football Awards show in December. The winner will then receive his trophy at the Foundation’s Annual National Awards banquet on Jan. 12, 2008 in New Haven, CT at Yale University.

Davis and Spiller combined for 2125 rushing yards and a 6.4 average to go with 27 touchdowns last season. It was the most total rushing yards by two running backs on the same Clemson team. The two averaged 163.5 rushing yards per game, the third best combination in college football in 2006.