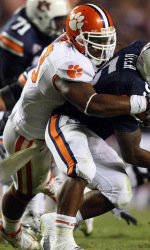 Bowers’ Accomplishments  Finalist for the Bronko Nagurski Award and Lombardi Award.  One of 15 “Players to Watch” for the Walter Camp Foundation National Player-of-the-Year Award. He is also one of just two defensive players on the list.  Semifinalist for the Bednarik Award.  Leads the nation in sacks (13.5). No other player has more than 11.5 sacks.  Second in the nation in tackles for loss (22).  His 13.5 sacks are second-most in a season in Tiger history, trailing only line¬backer Keith Adams, who had 16 sacks in 1999. Bowers broke the school record for sacks by a defensive lineman in a season with a sack at Florida State. The late Gaines Adams previously held the record in his ACC Defen¬sive Player-of-the-Year season of 2006 when he totaled 12.5 sacks.  Leads the ACC in sacks (next closest has 10 sacks).  Has recorded a sack in nine of the first 10 games of the season. He did not have one against Presbyterian College when he played just 21 snaps.  Has a school-record-tying eight straight games with being involved in a sack. He also has been involved in a sack in all nine games against FBS opponents.  Had nine tackles and four tackles for loss at #15 Auburn.  Had 3.5 tackles for loss against #16 Miami (FL).  Had a career-high three sacks in the 31-7 win over Maryland, as he was named co-national defensive player-of-the-week.  Leads the team in tackles (60) and quarterback pressures (16).  Clemson is tied for eighth in the nation in tackles for loss and ninth in scoring defense thanks in large part to Bowers.