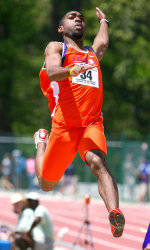 CLEMSON, SC – Brianna Rollins won the fifth qualifying heat of the women’s 100 hurdles to advance to the semifinals at the U.S. Olympic Trials in Eugene, OR. She and teammate Bridgette Owens, the second and third-place finishers at the NCAA Outdoor Championships two weeks ago, will compete in Saturday’s semis at 6:15 PM EDT. Should either or both advance to the final, it will be held at 8:45 PM EDT and shown live on NBC.

“I just wanted to run a good, clean race, and I did,” Rollins said. “It’s a wonderful feeling being out here with the best in the nation.”

Rollins won the final qualifying heat at rain-soaked Hayward Field with a time of 12.88, fifth-fastest of the opening round. Owens was second in her heat to NCAA outdoor champion Christina Manning, clocking a time of 12.97. Other Tigers that missed the semifinal cut in the event included Monique Gracia (13.23), Keni Harrison (13.23), Michaylin Golladay (13.44) and Jasmine Edgerson (13.48).

Former Clemson long jumpers George Kitchens both placed inside the top 12 of Friday’s preliminaries to advance to the final. Fields hit a top mark of 25’6.75″ on his third and final attempt to place fifth overall. Fields was the 2007 ACC Indoor Champion in the long jump for Clemson. Kitchens, a four-time All-American for the Tigers from 2002-05, hit a best mark of 25’3.5″ on his second attempt to finish eighth in the preliminary round.

Fields and Kitchens will compete in the men’s long jump final at 6:00 PM EDT on Sunday, June 24.

Miller Moss, 2011 NCAA heptathlon champion and Clemson graduate, is 10th in the decathlon standings through half of the 10 events. Moss compiled 3,935 points on day one. He ran the final heat of the 400 dash in the hardest rain of the day, clocking a time of 49.62, fifth-best overall. He was also sixth among all competitors in the shot put with a mark of 46’0.5″.

Moss is scheduled to resume the second day of competition on Saturday at 12:30 PM EDT.