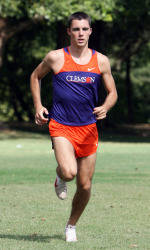 CLEMSON, SC – The men’s and women’s cross country teams are set to begin their 2009 season at the Gamecock Invitational on Friday in Columbia. The races will both be 5K in length and held at Fort Jackson. The men’s race is set for 6:30 p.m., with the women’s event slated to start at 7:00.

“I really feel we can learn a lot about our student-athletes by seeing how they react in a competitive environment,” said Brad Herbster, first-year coach in charge of the cross country teams. “Many of the kids we’re bringing will be vying for one of our top five spots as the season progresses, so it will be interesting to see how they react.”

The men’s team will carry just five athletes to the meet, led by junior Jonathan Sunde. The Charlotte, N.C. native was an All-ACC Academic Team selection last season and Clemson’s No. 2 finisher at both the ACC Championships and Southeast Regionals in 2008. He will be joined by veterans Chris Slate and Jasen Turnbull, as well as newcomers Blake Kennedy and Chris Ostrouchov.

The women’s team will be without the services of its top performers, Jenna Baker and Kim Ruck. However, Herbster will travel 10 student-athletes, five of which will be competing in their first-ever collegiate race. Leading the newcomers is Kelsey Armstrong, a junior from Talbott, Tenn. who was the 2008 national club cross country champion. Others competing in their first-ever meet will be Elyse Borisko, Samantha Eastwood, Lauren Reen and Sarah Turman.