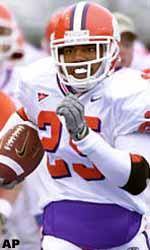 “I spoke with Roscoe’s mother today and she said Roscoe intends to withdraw from school for family reasons,” said Bowden. “All other comments should come from the family.”

Crosby played 12 snaps in the opening game against Georgia, but did not catch a pass. He practiced with the team on Monday, September 1, but missed the rest of the week and the Furman game for family reasons.

He sat out the 2002 season after he had Tommy John Surgery on his right elbow. He was granted a medical waiver by the ACC to return to Clemson in 2003.