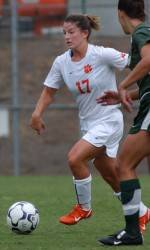 Courtney Foster Honored by the ACC

Foster led the Tigers to a pair of conference wins over NC State and an upset victory over No. 6 Duke. The junior forward/midfielder registered the game-winner against the Blue Devils in the 16th minute of action as the Tigers held on for the 1-0 win.

On Sunday against NC State, Foster scored two of the three Tiger goals as Clemson downed the Wolfpack, 3-1. After a scoreless first half, Foster scored the game’s first goal just 46 seconds into the second half as she collected a rebound off the right post and deposited the ball into the back of the net. The Conyers, Ga., native would later solidify the victory for Clemson as she scored her second goal of the game off a pass from Allison Graham at the 63:16 mark.

Soldner posted back-to-back shutouts in two double overtime games last week to pace the Hokies. The junior goalkeeper kept Maryland and Boston College off the scoreboard as Virginia Tech closed out conference play in 2005 with a pair of 0-0 ties. Soldner registered 220 minutes in goal while making 17 saves. The Lanesville, Ind., native moved into first place all-time at Virginia Tech for career shutouts with 16.5.

Foster and the Tigers are back in action as they close out the 2005 regular season against Florida State on Saturday. Soldner and the Hokies wrap-up their regular season schedule as they travel to Radford on Wednesday.