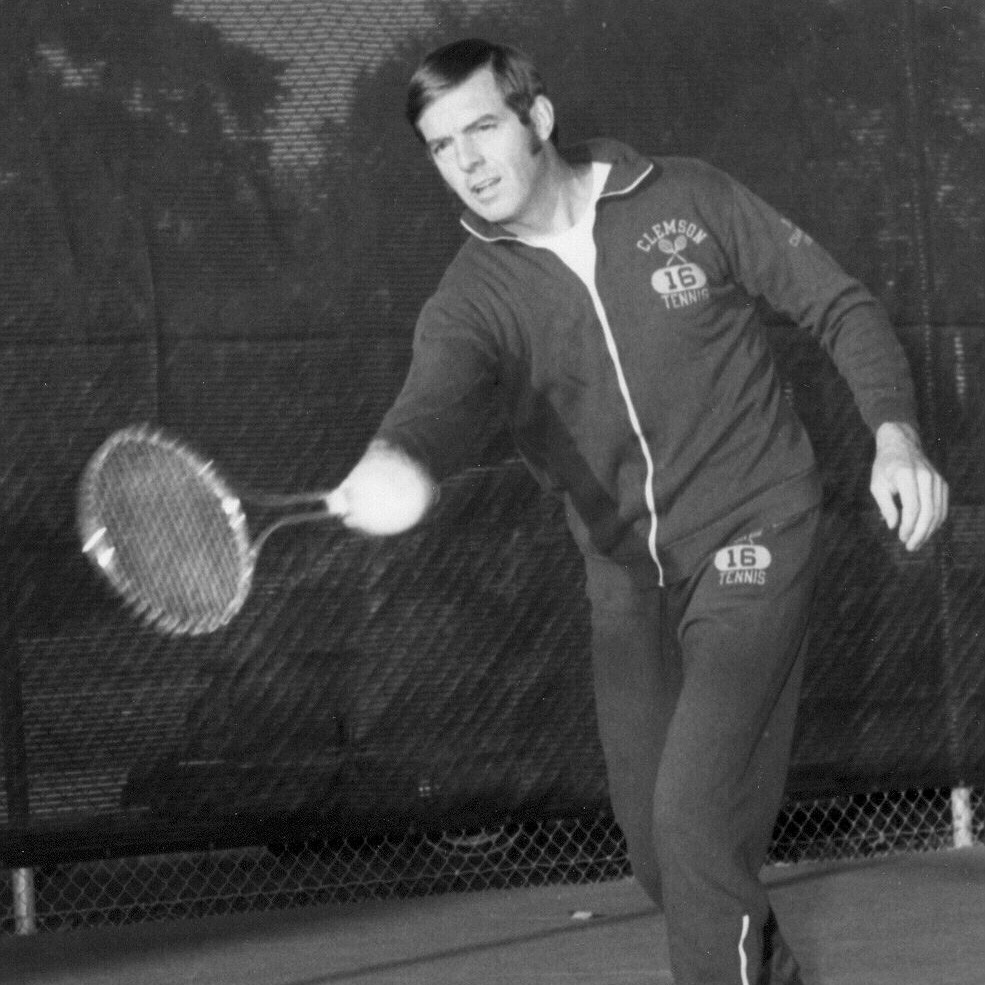 Duane Bruley has devoted his life to helping others.

He has spent his career teaching and inspiring young people in the classroom, and he also has taught and coached the sport he dearly loves, tennis.

Duane Bruley was the head coach of the men’s tennis team at Clemson from 1963-1973. He led the Tigers to their first Atlantic Coast Conference Championship in 1969 and had a 16-0 mark overall that season.  He served as the head coach for 11 seasons and also as professor of chemical engineering at Clemson.  Bruley had an 150-42 record and is the winningest coach at Clemson in winning pct. for all Tiger coaches with ten or more years experience, regardless of sport.

“I got my doctorate at the University of Tennessee and I coached tennis there.   I had played in the Knoxville City Tennis Championship and played for a Knoxville team and I had been giving tennis lessons and this is how General Robert Neyland, (legendary athletic director and head football coach at Tennessee), heard about me and gave me the job of head tennis coach at the University of Tennessee.”

Bruley then went to Clemson.

Bruley is a professor emeritus in the college of engineering at the University of Maryland Baltimore County and now lives in Ellicott City, MD.

Bruley was a two-sport letterwinner at Wisconsin-Eau Claire in football and tennis, and earned his Bachelor of Science degree in chemical engineering at the University of Wisconsin in 1956.

Bruley is a co-founder and former President (1983) of the International Society on Oxygen Transport to Tissue (ISOTT) and one of the contributors to the formation of the Bioengineering Section at the NSF and initiator of a joint review and funding effort between the NSF and the National Institutes of Health (NIH).

He also was the Head Men’s Tennis Coach at Tennessee, Clemson and Tulane.

“I had a job offer at Clemson teaching in their chemical engineering department, and I was really excited about it. I had no idea about the head tennis coach’s job being open at Clemson. In fact, I didn’t think I would coach anymore.”

But Clemson is certainly glad he furthered his coaching career.

“It so happens that Coach Frank Howard contacted me once I accepted the teaching job at Clemson.  He told me they were losing their coach this season and he needed a tennis coach.  Again, I hadn’t planned on coaching tennis anymore, but it was so tempting that I took the offer.  I really appreciate Coach Howard helping me and giving me the opportunity to be the head tennis coach at Clemson.

“I remember one day that Coach Howard wanted to see me. I nervously went to his office; I had no idea what he wanted.  “He told me in his gruff voice, ‘You know Bruley, I always thought tennis was a sissy sport.  But I just want to shake your hand and congratulate you.  Anyone that beats Georgia Tech is all right with me.’  I will never forget that.  We had beaten Georgia Tech earlier in the week.  He told me I was doing a great job, so I felt really great about what we were doing.

“I also officiated junior tournaments and I got to meet some wonderful people, and this helped in our recruiting as well.

“I never will forget my first match as head tennis coach at Clemson.   We were playing our rival, South Carolina, in then a conference match on March 23, 1963.  We defeated the Gamecocks 9-0.  What made this match so unbelievable is that we did not lose a game in the entire match!  We won every set 6-0.  All six singles and all three doubles matches were 6-0, 6-0.  I never heard of a match being won like that before or since.  It was a great way to start my career at Clemson.”

The Clemson Athletic Hall of Fame

“I’m excited about being inducted into the Clemson Hall of Fame this fall,” said Bruley.  “When you go into a hall of fame you take many people in with you.  I would like to thank my former players and assistant coaches for making this possible.   This honor seems surreal to me.  It was the effort of a lot of people including my wife (Suzanne) and three sons, Scott, Randy, and Mark, and all the players and assistant coaches.  It’s not an honor just for me, but for everyone surrounding me during my coaching days.

“Tennis is a sport where it encompasses athletic and mental abilities. It’s one sport that has it all-physical demands such as strength, speed, and endurance and it requires that you use your mental capabilities to think quickly and sharply to be able to excel at the game. In other words, it’s like a chess game in a physical sport.

“I got interested in tennis when my parents bought me a tennis racket at an early age.  At Chippewa Falls High School, our football coach required us to play a spring sport.  So I started running track, but I soon switched to tennis. So I credit my parents and my high school for developing my love for the game that continues to this day,” said Bruley.

“Clemson was a wonderful place for me and my family. All three of my sons were born at Clemson. I’ve been to a lot of colleges and universities during my career, but I think Clemson is the most balanced that I have seen.  Clemson excels in the classroom and in athletics, it’s a very special place.”