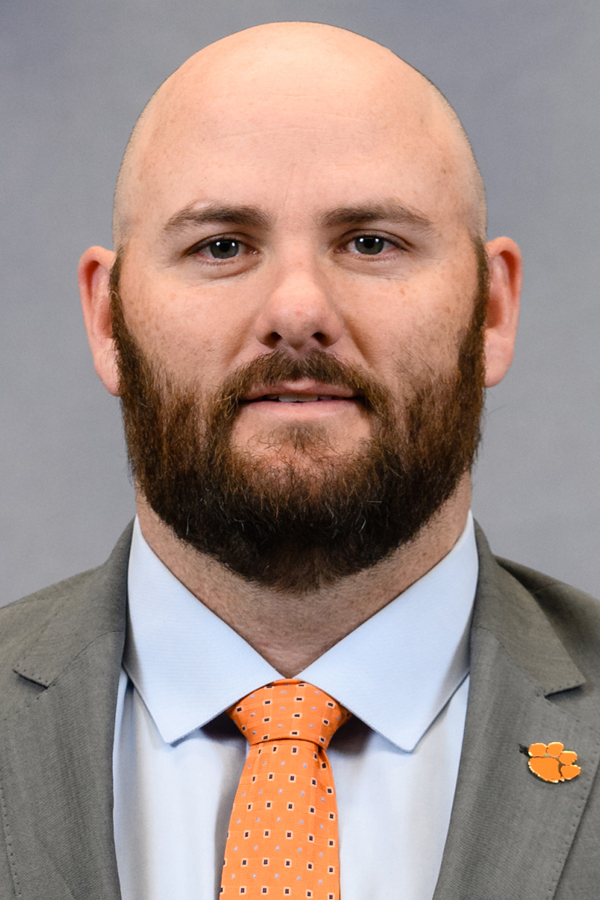 • Served as interim tight ends coach in preparation for the 2021 Cheez-It Bowl following some staff changes and absences prior to bowl season.

• Entering his sixth season across two tenures with the Clemson staff including off-field roles.

• In an off-field analyst capacity in 2021, assisted Robbie Caldwell as Clemson navigated a number of injuries across the offensive line that resulted in the Tigers starting seven different offensive line combinations through 13 games. Despite the injuries and attrition, Clemson limited opponents to one sack or fewer in eight games in 2021 and ranked second in the ACC in fewest sacks allowed (21.0).

• Spent the 2019-20 seasons as the offensive line coach at Georgia State.

• In his debut season with the Panthers, his unit helped power Georgia State to 241.6 rushing yards per game, good for No. 12 in the nation.

• Started his coaching career as a graduate assistant at Clemson in 2015. Spent three years in an on-field GA role before moving to an off-field video GA position for Clemson’s 2018 national championship season.

• Took the reins to the Clemson offensive line from veteran offensive line coach Robbie Caldwell, who transitioned into an off-field administrative role after 2021. Caldwell coached 532 career games at the collegiate level over 44 years before entrusting the unit to Austin.

• Starred along Clemson’s offensive line from 2006-09, appearing in 48 games with 39 starts, including starting each of his last 38 games.

• Played 2,501 snaps from scrimmage in his Clemson career, the 13th-most of any player at the time of his graduation.

• Was a third-team All-America selection by the Sporting News in 2009 and also earned Strength & Conditioning All-American status as well.

• Earned All-ACC selections in both 2008 and 2009 as part of a unit that powered running back C.J. Spiller to eventual induction into the College Football Hall of Fame.

• Was a three-time All-ACC Academic selection, earning the honor in each of his last three seasons at Clemson. Prior to the selection of the 2021 team, he was one of only 19 Clemson players to earn at least three career All-ACC Academic Team selections since the conference was founded in 1953.

• Played four years in the NFL with the Houston Texans, Carolina Panthers and Indianapolis Colts from 2010-13.

• Said Head Coach Dabo Swinney of Austin’s hiring: “[His hire] is something that we knew was going to happen at some point, and it was one of the main reasons I brought him back from Georgia State. He’s been incredibly well-groomed and well-prepared and he’s going to do a fantastic job with that offensive line.”

• Earned a political science degree from Clemson in 2009.