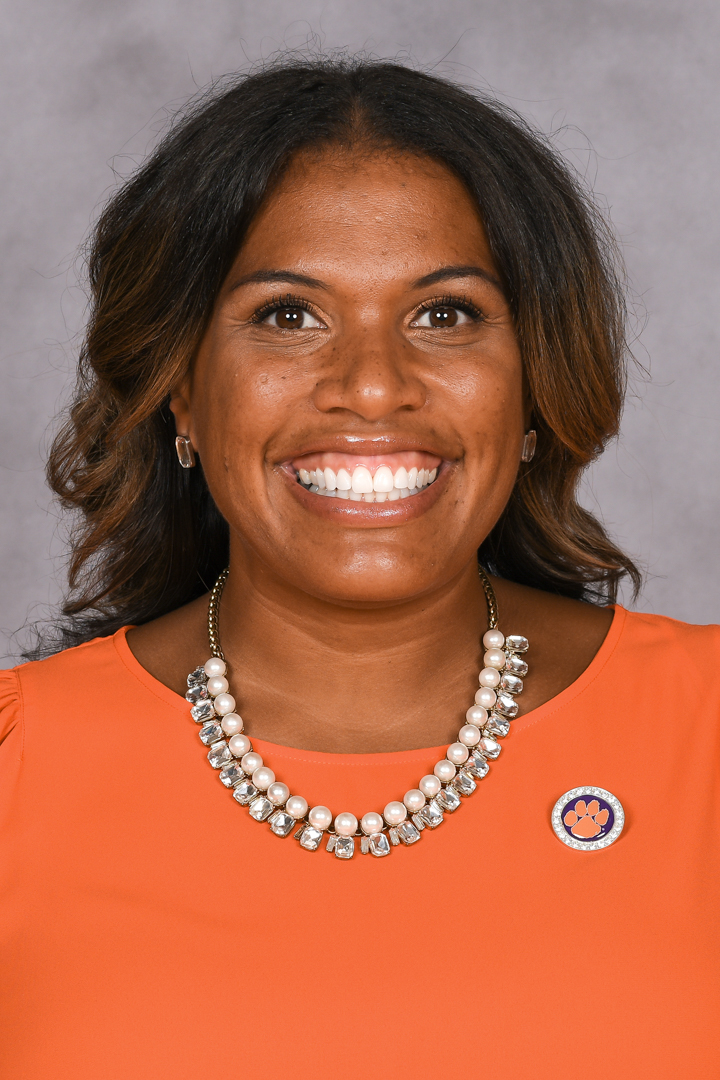 Michaela Franklin enters her fourth season as Clemson Volleyball Head Coach in the fall of 2020. Franklin was named Clemson’s 10th Head Coach on March 24, 2017 by Director of Athletics Dan Radakovich. Franklin had been the Associate Head Coach at Iowa since the spring of 2014 after stops at Green Bay (2013), Marquette (2009-12) and Northern Illinois (2006-08) following her playing career at Kansas State (2002-04).

Since arriving at Clemson, Franklin guided the Tigers to their first postseason appearance since 2009 and mentored four different players that earned All-ACC accolades on five occasions. Under the direction of Franklin, Clemson has been in the top-3 in the ACC in terms of attendance each season. In the classroom, the Clemson Volleyball program has excelled with Franklin at helm, having registered a team GPA program record in the spring of 2020. Franklin has also raised the bar when it comes to recruiting. After bringing in two recruiting classes that were given honorable mention recognition by the AVCA, Franklin’s 2020 recruiting class was tabbed No. 24 in the nation and was just one of two recruiting classes in the nation to feature four All-Americans.

Last season, Franklin and the Tigers went 3-0, including a sweep over SEC foe Georgia as well as a four-set win over a 2019 NCAA tournament qualifier in Kennesaw State, to win the annual Big Orange Bash tournament. Clemson’s 2019 non-conference slate was also highlighted by the program’s first-ever win over Central Arkansas as well as victories over Appalachian State and Oral Roberts. Franklin and the Tigers made history in the month of October last year when Clemson downed four straight ACC opponents, a first for the program since 2012. Outside hitter Kaylin Korte garnered Second Team All-ACC status for the second time under the guidance of Franklin, having done so in 2017, after Korte tied for fifth in the conference in kills (3.58/set). Additionally, freshman setter Mckenna Slavik was one of just five Power-5 freshman setters to average at least 9.70 assists per set. Both Slavik and middle hitter Alyssa Deloney were also named All-ACC Academic selections in 2019.

In 2018, Franklin led Clemson to its most wins in a single season since 2012 with an overall record over 19-15. The Tigers qualified for the National Invitational Volleyball Championship (NIVC) postseason tournament, where Clemson secured wins over Radford and Alabama A&M to give the Tigers back-to-back postseason wins for the first time in program history. Franklin mentored then redshirt-sophomore Bailey, a transfer from Ohio State, who earned Second Team All-ACC honors after she finished the regular season ranked fifth in kills (3.71/set) against ACC opponents. Additionally, former Clemson setter Gabby Easton and right side hitter Solei Thomas were named to the All-ACC Freshman Team. From a statistical standpoint, Easton was the top freshman setter in the conference with an average of 10.74 assists per set, which was good No. 3 overall in the ACC. Her 10.74 assists-per-set average was also good for fifth in the nation among all freshmen and ranked third among all Power-5 freshmen. Easton’s 1,278 assists were also the second most by a freshman in program history, a milestone that she reached with two matches remaining in Clemson’s regular season. Thomas ranked second on the team in kills after averaging 2.89 kills per set in 2018. The rookie right side hitter totaled 17 double-digit kill matches, including a career-best 20 kills against Appalachian State (Sept. 1, 2018). Both Easton and Thomas were named ACC Freshman of the Week on two occasions each. The 2018 ACC postseason awards announcement marked the first time since 2011 Clemson collected three ACC postseason selections. Bailey, Easton and Thomas joined Korte, who was tabbed a Second Team All-ACC selection in 2017, as ACC postseason award recipients under the direction of Franklin. Korte was sidelined for the entirety of the 2018 season with a lower body injury.

In her first season as Head Coach at Clemson, Franklin aided the Tigers to three straight wins over Bethune-Cookman, Jacksonville and Lamar to win Clemson’s annual Big Orange Bash tournament. Franklin guided then-sophomore Korte to Second Team All-ACC honors after she led the team in kills (3.36/set) and attempts (9.67/set), and ranked second on the team in digs (2.23/set).

In 2016, Iowa finished 19-13 overall with victories over No. 17 Purdue and No. 24 Illinois. Franklin joined Iowa after spending the 2013 season as the Head Coach at Green Bay. The Phoenix accomplished a 9-5 mark in Horizon League action, and Franklin had four players receive Horizon League honors at the end of the season, including three all-conference selections and the conference Freshman of the Year. It was only the second time in Green Bay history three players earned all-league nods and the first time in school history the Phoenix had a freshman of the year and a total of four postseason honorees.

Prior to her time at Green Bay, Franklin spent four seasons coaching alongside current Iowa head coach Bond Shymansky as an Assistant Coach at Marquette. While at Marquette, she served as the team’s recruiting coordinator, trained the outside hitters and was the defensive coordinator. The Golden Eagles appeared in back-to-back NCAA Tournaments in 2011 and 2012, and finished second in the Big East Conference in 2012 with a 13-2 record.

Franklin began her coaching career as an Assistant Coach at Northern Illinois from 2006-08.

Franklin played collegiate volleyball at Kansas State from 2002-04, where she helped the Wildcats to a Big 12 Championship and three NCAA Tournament appearances including a berth in the Sweet 16. The Lincoln, Nebraska native graduated with a bachelor’s degree in family studies and human services in 2005.