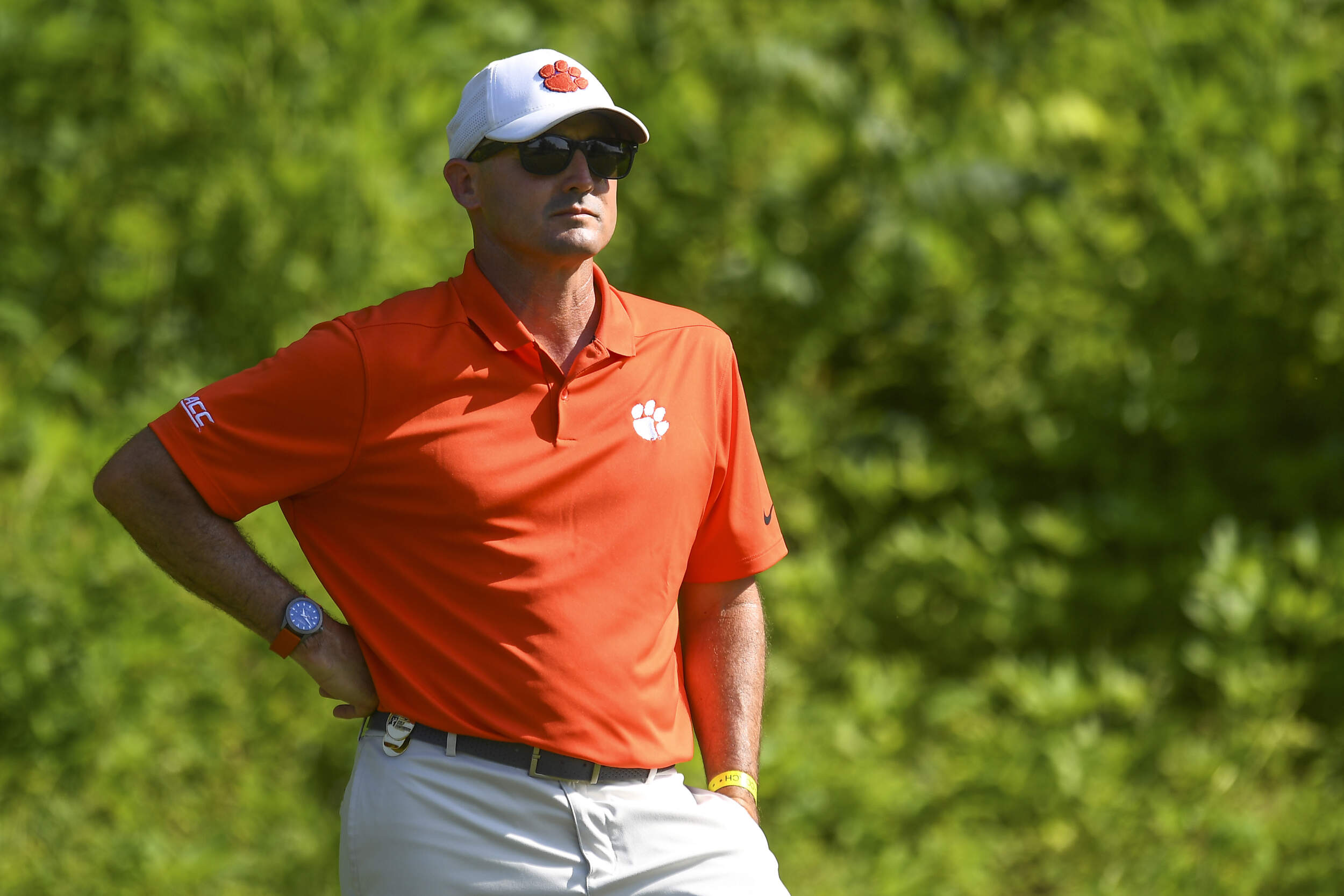 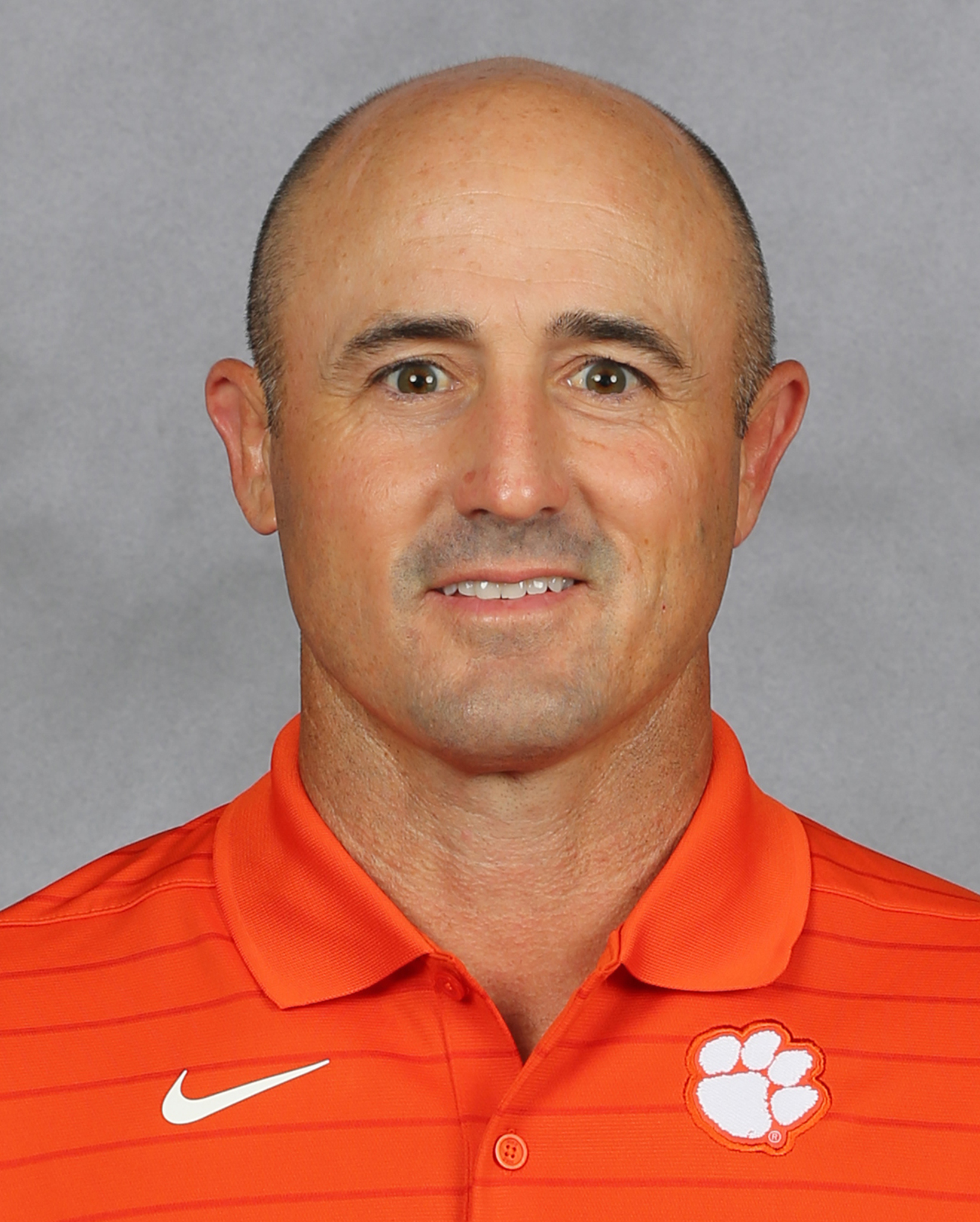 On July 1, 2021, Jordan Byrd succeeded Larry Penley as the head coach of the Clemson men’s golf program.   Penley had served as the leader of the program for 38 years, and his list of accomplishments during that era rank among the best in the history of the sport at the college level.

Many of those accomplishments took place over the last 16 years when Byrd was Penley’s associate head coach and recruiting coordinator.   His level of experience with the program made  his promotion to the position a virtual no-brainer.

From recruiting to golf instruction to facility enhancement to overall administration of the program, Byrd has had a positive influence on the program.   He had a big hand in the design and fundraising for the Larry Penley Golf Building that was dedicated in the fall of 2011.

Byrd has been a major reason Clemson is one of just six schools to reach the NCAA National Tournament or rank in the top 30 of the Golfweek/Sagarin rankings each of the last eighth years.

That includes the spring of 2021 when Clemson won the ACC Championship in thrilling fashion, won three other national tournaments, held a number-one seed entering the Kingston Regional, finished 13th at the NCAA National Tournament and boasted the individual NCAA Champion in Turk Pettit.    Pettit was just the second Clemson player to win the individual National Championship.

The Tigers ranked 14th in the nation Golfweek/Sagarin ranking for 2019-20 and were in position to make another run at the NCAA National Tournament and a spot in the match play championship round when COVID19 ended the season.

In 2018-19, Clemson finished in a tie for eighth nationally, and missed out of the match play tournament by just one shot.  It was Clemson’s best team finish in 11 years. Bryson Nimmer led that Clemson team and was named a first-team All-American with a school record 69.73 stroke average.

The 2017-18 team tied for 13th at the NCAA National Tournament and was led by Nimmer and current PGA Tour player Doc Redman.  They both finished in the top 15 individually.

The Tigers have had quite a run in the last six years with 17 victories.  The 17 wins in six years rank as the most for the program in that period of time in 15 years.

In the summer of 2017, William Nottingham won the North-South Amateur at Pinehurst No. 2, then Doc Redman brought the program considerable national acclaim by winning the US Amateur at Riviera Country Club, just the second Tiger to win that event.  Byrd recruited both to Clemson.

In his first 16 years with the program, Clemson finished in the top 20 at the NCAA Championships seven times.  Additionally, Clemson finished 14th in the Golfweek/Sagarin ranking in 2020 when there was no NCAA Tournament.   The program has reached the NCAA Tournament all 16 years it has been held since Byrd has been Penley’s only assistant, and has been ranked in the final top 25 of the Sagarin computer rankings 12 times.

The Tigers added AJGA All-Americans Carson Young and Austin Langdale in 2013.  Three freshmen were in the starting lineup in 2018 when Clemson finished second in the ACC, second at the NCAA Regional and 13th in the nation.  Bryson Nimmer joined the group with his ACC Player of the Year selection in 2019.

Byrd moved into the newly created assistant golf coach position at Clemson University on August 4, 2005. He became Clemson’s first assistant coach in the sport since the 1982-83 academic year when Larry Penley held the position before he succeeded Bobby Robinson as Clemson’s head coach the following year.

He has considerable experience as a player and is familiar with the Clemson program. He was the Southern Conference Champion in 1997 as a junior, and is the brother of former Clemson All-American and current PGA Tour player Jonathan Byrd.  Jonathan is a five-time winner on the PGA Tour.

Jordan Byrd was the captain of the Furman golf team his senior year (1997-98). He won the Southern Conference Championship as a junior in 1997 when the Paladins also won the team title. With that team championship, Furman qualified as a team for the NCAA tournament for the first time in the program’s history.

Byrd had 11 top 10 finishes in his career at Furman and was named to the All-Southern Conference team in 1997 and 1998. He led the team in stroke average as a junior and had a career stroke average that was one of the best in Furman history when he graduated.  He had a career best 66 at the 1996 Old Dominion Seascape Invitational and was Furman’s top golfer in nine different tournaments over his career.

Over his final two seasons as a collegian, he competed against his brother Jonathan and the Clemson Tigers four times. It is interesting to note that the brothers had the exact same 54-hole score in two of the four tournaments. They tied for eighth with 218 scores at the 1997 Furman Invitational, then had identical 229 scores at the NCAA East Regional later that year at Hot Springs, VA. Jordan was a junior at Furman and Jonathan a freshman at Clemson that year.

Byrd comes from an athletic family. In addition to the accomplishments of his brother, his father, the late Jim Byrd, was a standout football player at North Carolina in the 1960s. Jim Byrd and his wife Jo were omnipresent at Clemson golf events supporting the Tigers for many years.

Jordan also has had an outstanding amateur career. He reached the semifinals of the North-South Amateur in 1997. In 2006 he finished second in the South Carolina Amateur (tied with Clemson player Phillip Mollica). He has also qualified for the US Amateur and the US Mid-Amateur. In both qualifiers, he won medalist honors. He also teamed with his father, to win the South Carolina Father-Son Amateur Championship in the summer of 2006.

In the fall of 2007, Byrd reached the quarterfinals of the United States Mid-Amateur. He was just three victories away from joining his brother at the 2008 Masters. Byrd was ranked among the top 100 amateurs according to the Golfweek Amateur rankings for most of the summer of 2007.

In 2008, he advanced to the second round of the US Mid-Amateur at Milwaukee Country Club before he was defeated in 23 holes by former Clemson golfer Stephen White. He also qualified for stroke play at the Mid-Amateur in 2009. He played in the National Four Ball Tournament at the Olympic Club in San Francisco in 2015.

After graduating from Furman in 1998 with a Bachelor of Arts degree in business administration, Byrd pursued a professional career for two years. He played on the Hooter’s Tour and the Tear Drop Tour during his professional career and had four top five finishes.

From May of 2001 to the summer of 2005, Byrd worked as a salesman, trader, portfolio manager, and technical analyst at DiBiasio & Edgington Inc. in Annandale, VA.

Honors: Southern Conference Champion in 1997; Qualified for US Amateur and US Mid-Amateur in 2006; Quarterfinalist at 2007 United States Mid-Amateur; Finalist for Semifinalist for Jan Strickland Award (assistant coach of the year) in 2010, 2012 and 2017.