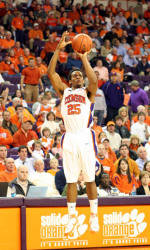 Clemson, SC – Cliff Hammonds of the men’s basketball team has been named to the ESPN The Magazine Academic All-District team, as selected by members of CoSIDA (College Sports Information Directors of America). Hammonds is just the third All-District III selection in school history, joining Tom Wideman (1998, 1999) and Shawan Robinson (2005). Hammonds is eligible for Academic All-America recognition, which will be announced Wednesday, February 27 by CoSIDA.

Hammonds has over a 3.2 cumulative GPA as a double major in architecture and psychology. He was named to the President’s List for the fall semester and is on track to earn both of his degrees in May. When he does so, he will be the first scholarship basketball player on record at Clemson to earn a degree in architecture.

On the court, Hammonds ranks in the top 10 in school history in starts, minutes played, three-point goals, steals, assists, and assist-to-turnover ratio. He is 17th in school history with 1,298 points scored. This year, he ranks first in the ACC in assist-to-turnover ratio (2.89) and third in steals per game (2.14). Hammonds is one of five players averaging in double figures for Oliver Purnell’s team. He is currently at 10.5 points per game.