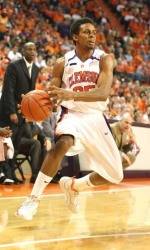 Lubbock, TX – Five of the nation’s premier basketball players and five outstanding coaches have been named finalists for the prestigious Chip Hilton and Clair Bee Awards, to be presented by Chip Hilton Sports and the Naismith Memorial Basketball Hall of Fame at the Final Four in San Antonio, April 7, 2008.

Chip Hilton Sports and the Basketball Hall of Fame began presenting the awards in 1997 as a way to honor outstanding excellence and character in college basketball during the past season.

The Chip Hilton Player of the Year Award honors a senior Division I men’s player for demonstrating outstanding character, leadership, and talent similar to the qualities evident in the 24-book Chip Hilton sports fiction series. The books authored by Clair Bee enjoyed their first popularity in the late 1940s through the mid-1960s and were updated and re-released to a new generation of readers in 1999.

The Clair Bee Coach of the Year Award honors a Division I men’s basketball coach who through his actions on and off the court, makes an outstanding contribution to the sport of college basketball. The criteria for this award involves actions that inspire, motivate, coach and educate their teams to achieve their fullest potential and demonstrate outstanding character.

By the time he left coaching in the 1950s, Clair Bee had already begun writing the Chip Hilton Sports Series, which are considered the top sports fiction series ever written.