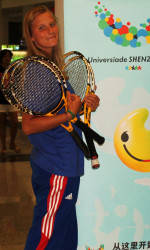 Clemson rising junior tennis player Nelly Ciolkowski is currently representing her home country of France at the World University Games in Shenzen, China. Ciolwkoski qualified for the team after gutting out a tough tournament victory in France earlier in the summer. She checked in with ClemsonTigers.com to share some of what her experience has been like overseas. Without further adieu…

SHENZEN, CHINA – What is so impressive when you first come to the site in Shenzhen are the stadiums and new installations made for the Games. A huge track and field stadium, 25 brand new tennis courts with one big central court, and new facilities for about 20 other sports. They literally built a small `village’for the athletes, and in the village, you have everyone wearing a shirt with their country-name on it, it’s like the rule.

The Universiade is one of the best experiences in sport that I ever had. It is hard to put words on it until you actually see the dimension of it, it is just such a big event that I feel so lucky to experience. I did not think it was going to be as serious. The Opening ceremony was impressive, like real Olympic Games, with the flame – a big show – every country walking with their respective flags on the stadium – it was even on a popular TV channel.

One of the best parts is that there is a good atmosphere between the athletes and it is very cool to see people coming from every continent and to share the same adventure in one city. We even exchange some flags, shirts or pins with other countries. It represents a lot for athletes to represent their native country, and I believe it is good nations like Sri Lanka, Zimbabwe, Augunda, Malaysia or Madagascar are given a chance to participate even though they are weak countries compared to USA, China or Russia.

Oh, and I even saw a Clemson tiger! He’s competing for track and field.

***Note: Ciolwkoski fell in the second round of the doubles to a team ranked in the top-200 nationally. She will return to her home in France on August 23 before continuing on to Clemson for the fall semester on August 25.***