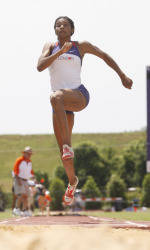 CLEMSON, SC – Every track & field athlete dreams of competing on the biggest stage in the world, the Olympic Games. With the London Olympics just four months away, Clemson graduate April Sinkler certainly includes herself in that category.

“I have the Olympics as a background on my cell phone,” said Sinkler, a fifth-year competitor with the No. 3 ranked women’s track & field team. “I strive to get there one day. It puts a huge factor into my training this season. I have it in the back of my head because I want to be able to hit my marks and compete at the Trials.”

Sinkler already recorded a good enough mark in the long jump last season to earn a trip to Eugene, OR for the U.S. Olympic Trials in late June. She is one of a handful of athletes good enough to compete in the Trials in multiple events.

One of those events won’t likely be the high jump, ironically, one of her first loves in the track & field world. The school record-holder in the indoor and outdoor high jump and a four-time ACC champion in the event, Sinkler decided along with Director of Track & Field Lawrence Johnson to focus on two events that may be a better fit for her future as a professional, the long jump and triple jump.

“I wanted to focus on those two this season,” said Sinkler, who sat out the 2012 indoor season because her eligibility had expired. “I knew if I tried the high jump, it might hinder me a little bit. Focusing on just two events has helped in the long run. Focusing on the technical aspects of all three made it hard to be specifically good at one event. When you’re competing in multiple jumps, you tend to revert back to what you do in the other events.”

Sinkler has been able to translate that tendency into unparalleled results, however. She owns seven career ACC individual championships and is a six-time All-American. She was the NCAA runner-up in the triple jump at the indoor nationals in 2011. She ranks first or second in the Clemson record books in each of the three jumps across both indoor and outdoor seasons.

She has only been competing again for the past month after sitting out the entire indoor season, but the results have been good. Sinkler has established a personal best 43’8.5″ in the triple jump, hitting the same mark each of her past two meets. Her long jump has been steady, despite running from a shorter approach most of the outdoor season.

“I’ve been working on short approaches,” she said. “It’s hard to make the transition to a longer one, seeing as I haven’t done it in about eight months. I’m stronger and faster, so at this point, it’s all about putting it together.”

She will have a chance to put it all together next week at the ACC Outdoor Championships, set for April 19-21 in Charlottesville, VA. Should she perform as well as she intends, perhaps she can add to her hardware collection and get closer to realizing her Olympic dream.

“In track & field, the Olympics is our Super Bowl,” said Johnson, her coach since 2008. “The Trials are basically like a playoff. To advance to the last stage is a dream. It’s great that we have the type of student-athletes, including April, that want to be and Clemson and do well, and then represent us on a national level.”