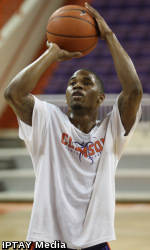 ClemsonTigers.com Exclusive: Sapp Driven to Make a Difference Next Season

Note: Over the last few days, ClemsonTigers.com has taken a look at the men’s basketball team’s offseason player development program for the rising sophomore class. Our fourth installment in the series features 6-foot-2 guard T.J. Sapp, who played in 31 games and was second among the team’s rookies with 16.1 minutes per game in 2011-12.

CLEMSON, SC – Clemson’s five scholarship freshmen combined to average 14.1 points and 6.4 rebounds in an average of 56 total minutes per game. For the Tigers to show improvement in 2011-12, Head Coach Brad Brownell knows this group’s development is arguably the program’s biggest storyline in the offseason.

“They can’t just be good enough to play, they have to be good enough to help us win,” said the Clemson mentor, who recently completed his second season in charge of the men’s basketball program. “There’s a big difference in just playing in a game, and being a big part of the reason that you win a game. They have to come to work this offseason with the idea that they’ve going to be productive players.”

One of those players that Brownell was referring to was Florida native T.J. Sapp, who had as much of an up-and-down season as any of his five rookies. Sapp played in all but one game, with nine starts, and averaged over 16 minutes per outing. He averaged 3.6 points per game and was third on the team with 24 three-point goals.

He was a key factor early in the season in several Tiger victories. He scored 11 points in the season opener against Gardner-Webb and followed with a seven-point, six-rebound outing at The Citadel. In 22 minutes against Iowa in the Big Ten/ACC Challenge, Sapp made 5-of-9 from the floor, including 3-of-6 from three-point distance, for a total of 13 points as the Tigers earned a convincing road win. After a nine-point effort at Hawaii, he responded on New Year’s Day with another 13-point performance, this time as Clemson rallied from a second half deficit to beat East Tennessee State.

Sapp believes the extra work required in college compared to high school probably played a factor down the stretch of the ACC regular season.

“There’s so much more to college ball,” he said. “You’re going against the best of the best. You’re not used to it, so you’ve got to get your body used to it. You have to make sure you’re doing whatever it takes on and off the court. It’s a long season, and your body tends to wear down. You have to take care of yourself so your body doesn’t burn out, so you can compete to the best of your ability for the team.”

Sapp enrolled at 180 pounds and, according to Brownell, may have physically worn down over the course of the season. The goal this offseason is for Sapp to increase his weight to 195 by the start of fall workouts, so that he will maintain a playing weight of at least 190 during the season.

“T.J. lost weight during the season, and it affected him,” Brownell said. “He needs better leg strength, and he needs to add seven to 10 pounds. If he does that, it will help his shooting, because he can be pretty good in that area for us. He can make shots, especially when he’s in shape and not tired.”

Sapp, who is already up to 191 pounds, has spent nearly all his time during individual skill workouts the last two weeks trying to improve three things: shooting, ball-handling and finishing stronger at the rim. He also has spent time trying to find ways to score coming off screens.

With the graduation of guards Tanner Smith and Andre Young, he has a strong sense of urgency to improve his point guard skills to help classmate Rod Hall and incoming freshmen Adonis Filer and Jordan Roper share primary ball-handling duties.

“Ball-handling will be a big key for me this offseason,” Sapp said. “When I came in, I thought I’d play with the ball in my hand a little bit more. My role will probably change a little bit next season, but I’m working hard and doing whatever it takes to prepare for next year.”