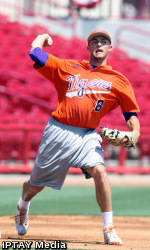 COLUMBIA, SC – When he thinks about winning games on the road, Clemson Head Coach Jack Leggett goes back to a conversation he was having one day with his 2002 team before that season began.

He remembers former All-American Khalil Greene speaking up and talking about how important it was to win games on the road, especially if they wanted to be a special team and advance to the College World Series.

“That made an impression on me,” Leggett said during Thursday’s press conference at the NCAA Tournament’s Columbia, SC Regional. “Here is this young kid, 21-years old, and the first thing that comes out of his mouth is we need to be able to win on the road.”

Those 2002 Tigers went on to win 18 games away from Doug Kingsmore Stadium in Clemson, while winning 54 games overall and finishing up the year in Omaha, NE for the College World Series.

“You can feel comfortable and safe at home with the fans behind you,” Leggett said. “Going on the road you have to be able to lock in and fight together as a team.”

Clemson’s fight to get to Omaha for a 13th time begins Friday in what can be a road-like environment when it plays No. 3 seed Coastal Carolina at noon (ESPNU) in the first game of the Columbia Regional. The second-seeded Tigers and the Chanticleers will tangle at Carolina Stadium, where most of the 9,000 in attendance will be wearing South Carolina garnet and black, and will be pulling against Clemson no matter who it is playing.

“Yeah, there are not a lot of people (here) that like the color orange,” Clemson third baseman Richie Shaffer said.

But if there is one team built to win on the road in this regional, the Tigers (33-26) can make a good argument. Since April, Clemson has won 10 of its 16 games away from Doug Kingsmore, and at one point won eight of nine games.

“I will not say we have played better on the road, but we have played pretty well on the road,” Leggett said. “I think our players feel comfortable. You kind of get in a routine and there are not a lot of distractions coming down here. The pressure is not on us.

“We are one of those teams down here, trying to fight to get to the next level. I look at this as a good environment and a good challenge for us.” Shaffer says playing on the road allows a team to come together more and become a closer unit.

“Everyone is together. At home, sometimes, some people may show up at different times. I know I get there a little bit earlier and some will show up later. I think maybe it is the team doing everything together that kind of brings us together when we are on the road.”

Clemson has 10 players that have had recent experience winning a regional away from home. Two years ago, the Tigers went to Auburn, AL and went 3-1 on their way to winning the Auburn Regional and advancing to the Super Regional round. Clemson went on to beat Alabama the next week to earn a spot in the College World Series.

“We usually play better when our backs are against the wall,” Leggett said. “We have been battling all season long to get to where we are right now. So now, let’s go have some fun.”