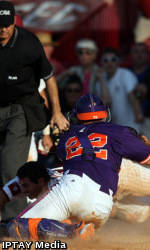 ClemsonTigers.com Exclusive: “It Was One of Those Classic Games”

COLUMBIA, SC – After LB Dantzler took Kevin Brady’s offering over the head of Brad Felder in right field to score South Carolina’s winning run in its 5-4 victory in 12 innings Saturday in the Columbia Regional, Clemson head coach Jack Leggett and Gamecock head coach Ray Tanner stood on the field a little longer than usual and complimented each other on the way each battled in what was one of the best games in the storied history of the rivalry.

“It was one of those classic games,” Leggett said. “You can look at it from both sides and think of little things here and there that could have made a difference. But both teams played hard and both teams played tough and both did what they had to do to keep themselves in the ballgame one way or the other.

“We battled from behind, and then they battled from behind after we got up two.” Both teams battled in what was the longest game, in terms of innings, since South Carolina beat Clemson 9-8 in 12 innings in Columbia in April of 2000. But Saturday’s battle had a little bit of everything. There was controversy – when Clemson had a run taken off the scoreboard in the second inning when Jon McGibbon was called for runner’s interference while trying to break up a double play. There were big hits – Brad Felder’s and Adam Matthew’s home runs. There were big plays – Felder’s sliding catch in the bottom of the seventh to preserve the Tigers’ lead at the time, and a crazy play at the plate – South Carolina’s Chase Vergason missing home plate while trying to slide past catcher Spencer Kieboom, that sent the game into extra innings.

“There was so much that happened in that game,” Tanner said. “It was just a tremendous college baseball game between two teams that did not want to give in or give up. It was a battle all day.”

What seemingly got lost in the battle was the pitching of Clemson freshman Daniel Gossett. A young man, who grew up watching this rivalry, he out-pitched South Carolina hurler Michael Roth and left the game after seven innings with a 3-2 lead. The Lyman, SC native gave up only two runs – Matthews’ two-run shot in the bottom of the fourth – on four hits, while striking out eight Gamecocks.

“The Clemson-Carolina game is a huge rivalry, and this was a regional,” the righty said. “It was a great environment to pitch in and I knew coming in the atmosphere was going to be crazy. I just focused on my breathing and tried to keep my heart rate low and not and get ahead of myself. I had to think of it as any other game, and force that into my mind.

“It wasn’t just the biggest game I have ever been in. It was just another start and I had to keep pitching.”

Gossett’s pitching allowed the Tigers (34-27) to stay close to the two-time defending national champions, and eventually allowed them to grab the lead with a three-run seventh inning thanks to RBI hits from Steve Wilkerson and Thomas Brittle, and a fielder’s choice RBI from Phil Pohl.

“I’m proud of my team,” Leggett said. “I thought we played extremely hard and pitched very well. We played really good defense and got some big hits when we had to.”

Clemson eventually ran Roth off in that seventh inning, and then Felder added what looked like an insurance run in the top of the eighth when he took one of Matt Price’s pitches over the right field wall and out of Carolina Stadium.

“I felt good (at that time), but anytime that happens, you are hoping there’s another guy on base,” Leggett said. “You know in a close game you are going to need those runs and every single run counts. I felt better, of course, but we knew there were still a few innings to go and we were going to have to keep them down.”

South Carolina (42-17) ultimately got a run back in the bottom of the eighth and then tied the game thanks to an RBI hit from Joey Pankake in the ninth to send the game into extra innings.

“We’ve been here before,” Leggett said. “We’ve done this before in terms of losing a tough ballgame and turning it around. Now it becomes a mental game. We have to give Coastal Carolina our best shot and hope for a second ball game. I’m proud of my players. They played extremely hard.”

And they did it in perhaps what was the best game the rivalry has ever seen.