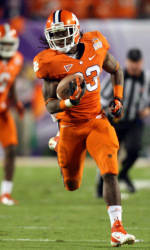 ClemsonTigers.com Exclusive: Ellington Has More to Give

CLEMSON, SC – When a running back rushes for 1,178 yards and scores 11 touchdowns in season, it is perceived he had a really good year.

And though those numbers are impressive – the rushing yards rank eighth in Clemson history for a single season – Andre Ellington says he can do better, a whole lot better.

“I did not play to my full capabilities last year,” he said.

Part of that was due to an ankle injury he suffered in the Tigers’ 59-38 victory over North Carolina last October. Though he missed just one game, the following week at Georgia Tech, it took several more weeks before he was back to 100 percent.

When Ellington got back to full strength, he rushed for 125 yards against Virginia Tech in the ACC Championship Game and then followed that up with a 116-yard performance in the Orange Bowl. It was only the second time all season he recorded back-to-back 100-yard games.

“When I’m fully ready to go and I’m 100 percent, I’m a different guy on the field,” the Clemson running back said. “It is one of those things where you have to fight through some pain, and I kind of did that the whole season last year. I still ended up having a pretty good season. I’m just curious to see what I can do when I’m 100 percent all year.”

That’s the main reason why Ellington decided to return to Clemson for his senior season instead of jumping to the NFL.

“It’s an opportunity for me to better my stock. It not only benefits me, but my teammates, too, as we shoot for another ACC championship,” he said.

Ellington said he spoke with a lot of people before making his decision to come back to Clemson, but he said it was his talk with head coach Dabo Swinney that finally turned things back in Clemson’s favor.

“It was difficult because I had people pulling me in different directions,” the rising senior said. “I had to weigh my options and talk to the right people. Coach Swinney was a big help in that situation. Talking to him cleared my mind.

“He told me to `do what is best for you.’ That’s when I kind of realized I was not ready to leave Clemson yet. I still have some things I have to work on in order to better my game. That played a big role in why I came back this year.”

One of the things Ellington says he has to improve upon is his hands. He said he dropped too many passes last season, and if he wants to make it in the NFL, he understands he has to be a more complete back. Though his blocking skills are above the average college running back, Ellington has to work on catching the football. He caught only 22 passes for 109 yards in 2011 and had zero receiving touchdowns.

“I want to be a big factor in our passing game this year, and I feel like I can do that,” Ellington said.

If he can adjust to the new running scheme, Ellington should also become an even bigger factor in the running game than he already is. This past winter, the Clemson coaches, led by offensive coordinator Chad Morris, visited Nevada and Oklahoma State in hopes of finding better ways to utilize Ellington’s and backup running back Mike Bellamy’s talents as well as a few other things.

As a result, Clemson has incorporated more of the pistol formation into an offense that averaged 440.8 yards and 33.6 points per game last fall.

“It’s an advantage for the running backs because we are all squared up behind the quarterback,” Ellington said. “Linebackers cannot tell where we are going to go as opposed to being in a slant formation where the majority of the time we are going to come across the ball.

“The pistol formation kind of slows the defense down a little bit.”

And that will speed Ellington up and thus allow him to have the kind of year he knows he is capable of having.