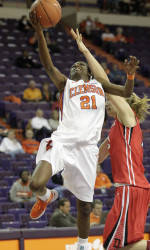 ClemsonTigers.com Exclusive: Dixon gets Lady Tigers off to good start

CLEMSON, SC — Nikki Dixon likes being an underdog. That’s why she came to Clemson.

Knowing she could help turn around a program that has struggled in recent years, the Alpharetta, GA native says she came to Clemson because she liked the idea of being a part of team that believes it can change the culture and get Clemson back to being ranked among the elite teams in the ACC, even when no one else thinks they can.

Dixon started her quest to change the culture Friday night as she produced a game-high 21 points to go along with five rebounds and five assists in leading the Lady Tigers to a 72-62 victory over Davidson in the season-opener.

“I have always been an underdog,” the true freshman said. “In high school and in AAU I always played on underdog teams. It is the fight in all of us that makes me want to win and to be a part of this program.

“When I heard the Tigers were looking to rebuild, I was more than happy to come here so I can help rebuild our program and get us right back on top where we deserve to be.”

With performances like Friday night’s at Littlejohn Coliseum it should not take long for Dixon to help the Lady Tigers get back there. Right from the start her energy was evident and was a deference maker as she drew an early charge and then went down and hit a jump shot on the other end to get Clemson rolling.

“Nikki is such an instinctual player, especially on the defensive end,” Clemson Head Coach Itoro Coleman said. “She does a great job of deflecting the ball, and really getting us started in our fast breaks, and it was good to see.”

Dixon’s play got the Lady Tigers (1-0) rolling late in the first half when she helped spark an 8-0 run that allowed Clemson to take a 34-27 lead into the break. Dixon scored all eight points in that span. It was an impressive performance for a true freshman in her first game.

It even started comparisons with another true freshman on campus that plays football – Sammy Watkins. In his first game, Watkins scored on a 39-yard touchdown the second time he touched the ball.

“Nikki plays hard,” Coleman said. “She plays extremely hard. She gives it all she has in practice and she gives it up in the games. We feed off of her.”

Her fellow freshmen definitely did as they scored 19 of Clemson’s 34 points in the first half and finished the night with 41 points and 16 assists. Besides Dixon’s 21 points, Chelsea Lindsey scored 10 points and had five assists, while Kelly Gramlich added seven points.

“That’s our team,” Coleman said. “It is a makeup of freshmen and sophomores and we have two seniors, but for the most part everyone contributed.”

And it all started with Dixon.

“It takes me a while to understand the game and figure out what I have to do,” she said. “I definitely pushed through and remained focus throughout the game and tried to keep telling myself that this is just a game. I kept telling myself that this isn’t a game where I have to score a million points and do this and that. All I had to do was get the job done, and I did that.”

And Friday night was just the start.