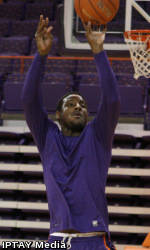 Note: Over the last few days, ClemsonTigers.com has taken a look at the men’s basketball team’s offseason player development program for the rising sophomore class. Our third feature is 6-foot-2 guard Devin Coleman, who finished the 2011-12 season strong with a team-high 15 points in the ACC Tournament versus Virginia Tech.

CLEMSON, SC – Devin Coleman learned a number of invaluable lessons in his first year within Head Coach Brad Brownell’s system, but two in particular that stood out more than any others.

Twelve of Clemson’s 15 losses in 2011-12 came by eight points or less, and Coleman believes that his development this offseason could be a key factor in helping the Tigers overcome some of those narrow defeats.

“I’m not sure of what my role will be (next season), that still has to be proven to the coaches,” Coleman said. “I’m capable of contributing as a scorer. This offseason will be crucial in improving my ability.”

Coleman will get a later start on his offseason development plan due to a nagging hip/groin injury that has prevented him from participating in full individual workouts this month. He will return soon, and a new rule allowing coaches two hours per week of individual instruction during the summer will benefit Coleman more than any player on the roster.

He has participated in form shooting drills and basic conditioning, and the coaches will amp up his activity level as he recovers from injury. Coleman finished the 2011-12 season on a high note, leading Clemson in scoring with 15 points in the final game of the season against Virginia Tech. He played double figure minutes in eight of Clemson’s final 12 games, scoring nine points apiece in back-to-back wins at Wake Forest and home against No. 22 ranked Virginia.

Coleman endured a rough shooting start to his season, making only two of his first 23 field goal attempts. But, he made 21 of his final 41 shot attempts and showed tremendous progress over the last month and a half of his rookie season.

“He made great strides late in the season, especially offensively,” Brownell said. “To his credit, he came back from Christmas break with a new focus and energy. He was much more inquisitive, he asked a lot of questions. He earned his playing time by coming to practice every day, and not feeling sorry for himself. I’m proud of him for that because he showed growth and maturity.”

He’ll have to continue to show that growth and maturity as he transitions from his freshman season into a player who will be counted upon to play more minutes and fill a bigger role in 2012-13. Coleman knows there is a laundry list of things he needs to improve on to take the next step as a player.

“Being out with this injury, probably conditioning is the main thing,” he said. “I need to continue to work on my ball-handling, and to be more vocal. I talk on defense pretty well, but I’m not much of a `rah-rah’ kind of guy.”

Defense was a challenging concept for Coleman, who played in a zone-based scheme at Friends Central School in Philadelphia.

“The rotations and scheme were pretty challenging,” he said. “But by watching film and listening to the coaches, it doesn’t seem as hard to me now. But coming in, I definitely was behind.”

At a solid 200 pounds, Coleman possesses the physical ability to be a solid defensive player within Brownell’s man-to-man scheme. Clemson’s head coach looks forward to putting more time in with Coleman this summer to help him reach his potential.

“He wasn’t a very good defender last fall, but as he began to understand, he competed harder,” Brownell said. “He needs more reps in that area. I’m optimistic the new rule (summer work with coaches) will be good for us. We spend a lot of time on skill development. Plus, it’s a great way to interact and build relationships with your players.”