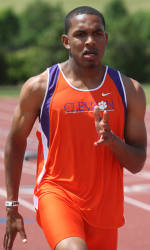 CLEMSON, SC – Two years ago, Clemson freshman Shai Carpenter transferred from Greenville High to Mauldin High for his senior season because he thought it would be better from a basketball standpoint. Ironically, for the former magnet student, the move turned out to be beneficial for his track & field career more than anything else.

He turned heads on the basketball court to the tune of a scoring average of 23.2 points per game, which led to AAAA first-team all-state honors. He received a scholarship offer from Delaware State to play in the Mid-Eastern Athletic Conference (MEAC).

But on April 9, 2011, his future took a drastic turn after he won the triple jump at the Taco Bell Classic in Columbia, SC with a leap of 49’4″.

“Clemson didn’t really show interest in me until that meet last spring,” Carpenter said. “Coach Mario (Wilson) contacted me and came to see me at Mauldin. He told me they were interested in me and wanted me to come to Clemson.”

Carpenter’s current teammate and former high school rival, C.J. Davidson, was runner-up at that meet for Daniel High School. The two had forged a relationship since their younger days on the AAU track & field circuit. Davidson had already signed his National Letter-of-Intent to compete for Clemson.

The addition of Carpenter would give the Tigers a formidable group of freshmen in the jumps.

“I signed in June to come to Clemson,” he said. “I was offered a scholarship for track to NC State. Louisville and TCU also tried to contact me after the Taco Bell meet.”

In the end, the Upstate native chose to pursue a career in collegiate track & field instead of on the hardwood. It’s a move that has paid off in year one of Carpenter’s career. At the Jim Click Shootout in Arizona, he broke the school’s freshman record in the triple jump. Three weeks later, he surpassed his personal best with a fourth-place leap of 51’8.25″ at the ACC Outdoor Championships.

His mark already ranks third in Clemson outdoor history, regardless of class. School record-holder Jason Bell jumped 51’11.75″ as a senior in 2006, a mere nine centimeters past Carpenter’s best mark from this season.

Carpenter already crossed off one of his goals by achieving his personal best: a trip to Bloomington, IN for the USA Junior Championships in June. If he can finish in one of the top two positions, he will earn a roster spot on Team USA for the World Juniors in Barcelona, Spain in July.

“It’s a great feeling (holding the school’s freshman record),” he said. “I am getting much stronger and my techniques are better. Coach Mario and the staff know what they’re talking about. Our freshmen are putting in work, trying to make a name for ourselves.”

Carpenter has already made a name for himself in the Clemson record books. You can count Director of Track & Field Lawrence Johnson among the believers.

“To be honest, we didn’t know what to expect from Shai,” he said. “He was always a part-time track guy. This is his first year of really having an offseason with track, and training every day. His sister was a triple jumper for four years at Cincinnati. It’s been in his system, but he always thought his route would be basketball. But he’s turned out to be a pretty good track & field athlete for us as a freshman.”

Pretty good, indeed. It’s an ongoing development that can be traced back to the time he transferred from Greenville to Mauldin to position himself for a better basketball career.

“People ask me all the time why I chose track over basketball,” he said. “I miss it bad, but I definitely made the right decision to choose track & field.”