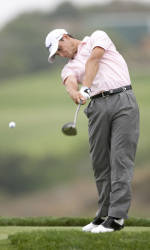 Clemson’s Stanley Named SGA National Am of the Month

BIRMINGHAM, AL – Clemson junior Kyle Stanley, the world’s fifth ranked amateur according to Golfweek, has been named as the Southern Golf Association’s National Amateur of the Month for July, primarily on the basis of his dramatic playoff victory in the 102nd Southern Amateur Golf Championship at Lake Nona Club in Orlando.

Despite a very strong field, Stanley overcame an eight-shot deficit over the final 33 holes to force a playoff with Marquette’s Mike Van Sickle and recent Eastern Am champ Jude Eustaquio of Lake Worth, FL. After all three completed 72 holes at 14-under-par 274, Stanley grabbed the Southern Am title for his second time by holing a 35-foot birdie putt on the first playoff hole while the other two managed pars.

Stanley, from Gig Harbor WA, joins the elite company of those who have won the Southern Am twice, a short list that includes such golf luminaries as Bobby Jones, Lanny Wadkins, Vinnie Giles and Justin Leonard.

Stanley won the National Amateur of the Month in July of 2006 as well, also after a victory in the Southern Amateur. He is just the third player to win the award twice in the five years of its existence.

Stanley has had a successful summer, including an appearance at the United States Open. He missed the 36-hole cut by just once shot. He is currently competing in the Western Amateur in Michigan and will play in the United States Amateur at Pinehurst #2 in August.

The 106-year-old Southern Golf Association promotes amateur golf in a variety of ways, including the staging of the prestigious Southern Amateur Championship, the 103rd edition scheduled next July at Colonial CC in Memphis.