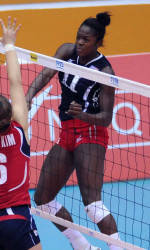 Clemson rising sophomore Mo Simmons is in Peru with the US Junior National Volleyball team at the FIVB Women’s Junior World Championship. Simmons has started all three matches for Team USA, who has gone 3-0 with wins over Poland, Belgium, and Korea in Trujillo, Peru. The Red, White, and Blue won Pool C, dropping only one set and now move on to Lima, Peru for the Final Eight of the tournament. They will be in Pool E with event-hosts Peru (3-0), Italy (2-1), and the Dominican Republic (2-1). Simmons has scored 23 total points so far, with 13 kills, nine blocks, and an ace. The nine blocks rank 10th in the tournament, as do her 0.90 blocks/set. The US team has drawn some large crowds so far, seeing as many as 2200 fans fill the stands in their 3-0 win over Belgium. The team will play the Dominican Republic on Tuesday, July 26, Italy on the 27th, and Peru on the 28th. Simmons was a 2010 ACC All-Freshman Team choice at Clemson. She will return to campus following the tournament, and the Tigers open the regular season on August 26.