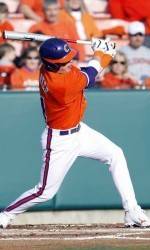 Parker went 10-for-16 (.625) with five doubles, one homer, seven RBIs, seven runs, five walks, one hit-by-pitch, a 1.125 slugging percentage, and a .727 on-base percentage in leading Clemson to a 4-0 record May 3-9. The Jacksonville, Fla., junior totaled at least one run, one hit, one RBI, one extra-base hit, and one walk in each of the four games and had three three-hit games.

Hernandez won his team-leading seventh game of the season in Miami’s 6-0 shutout win over Barry University Friday night. In six innings of work, Hernandez allowed just two hits, did not walk a batter and struck out a career-high 13 of the 21 batters he faced.

Hernandez recorded multiple strikeouts in five of his six innings, including striking out five of the first seven batters he faced and five of the last six. Hernandez combined with relievers E.J. Encinosa, Sam Robinson and Eric Whaley to record a season-high 19 strikeouts as a staff and secure the team’s fourth shut-out of the season.