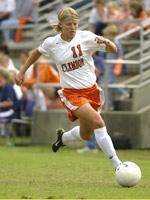 GREENSBORO, N.C. – Clemson senior Paige Ledford was tabbed ACC Women’s Soccer Player of the Week after posting a goal and an assist in two games as the Tigers downed two nationally ranked teams on the road over the weekend.

In Friday’s contest against No. 4 Texas, Ledford netted the game’s only goal late in the first half in the 42nd minute to give Clemson the win. Lindsay Browne fed Ledford, who one-timed a shot passed Longhorn goalie Dana Hall. The win marks the highest ranked team that Clemson has defeated on the road in the history of the Lady Tiger program.

Against No. 5 Texas A&M, the Ooltewah, Tenn. native assisted on the game winning goal off the foot of Lydia Vandenbergh in the 40th minute helping the Tigers to a 2-0 halftime lead. Clemson would strike for two more goals in the second half as they downed the Aggies 4-1 in College Station.

Ledford and the Tigers will return home for the first time this season as they face Furman and Richmond on Friday and Sunday, respectively.