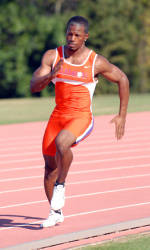 GREENSBORO, N.C. – Clemson’s Travis Padgett has been chosen as the first Atlantic Coast Conference Men’s Indoor Track & Field Performer of the Week, while Georgia Tech’s Fatmata Fofanah and Virginia Tech’s Kristi Castlin have been named Co-Performers of the Week on the women’s side.

Padgett, a junior from Shelby, N.C., recorded a time of 6.62 seconds to take first-place in the 60 meter dash at the Clemson Opener on Nov. 30- Dec. 1. With that performance, which stands as the fastest 60-meter time of the year in the ACC, he became the first league athlete to achieve an NCAA automatic qualifying time this season. This past weekend, Padgett continued his strong season, finishing eighth in the 200-meter at the Virginia Tech Invitational, and leading the Tigers’ 4 X 200m relay team to a first-place finish.

Georgia Tech’s Fofanah, a senior from The Bronx, N.Y., opened her season with a win in the 60-meter hurdles at the Kentucky Invitational this past weekend. With a time of 8.04 seconds in the event, she set a new personal-best mark and became the first athlete to automatically qualify for the NCAA Championships on the women’s side.

Castlin, a sophomore hurdler for the Hokies, reeled off her first individual win of the season with a first-place finish in the 55-meter hurdles at the Virginia Tech Invitational. Clocking in at 7.59 seconds, the Douglasville, Ga., native set a site record and achieved the provisional qualifying standard for the NCAA Championships. Castlin also was a part of a Hokies 4 X 200m relay team that took first-place at the event and broke the previous collegiate record, which had stood since 1979, with a time of 1:36.43.