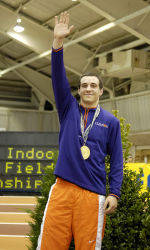 College Park, MD – Adam Linkenauger was one of three Tigers to earn All-ACC honors Friday at the conference’s outdoor track & field meet. The senior from Fincastle, VA became the first high jumper to sweep the event all four years of his eligibility at the outdoor meet. He is just the second Clemson athlete (Mike Columbus, discus, 1975-78) and ninth overall to achieve a four-year sweep in an ACC track & field event.

Clemson is third in the team race with 40 points after two days have been completed. North Carolina leads the meet with 61, while favorite Florida State is fourth at 39 total points.

Ryan Koontz earned his third straight All-ACC honor in the decathlon with a runner-up finish. He totaled 7,139 points but was unable to hold off a strong finish from Mateo Sossah of North Carolina. Koontz’ total was an NCAA provisional qualifying effort. Joey O’Rourke placed 10th overall with 6,129 points.

Linkenauger was especially impressive Friday, clearing all five heights he encountered on the first try. He won with a season-best, regional-qualifying clearance of 7’1.75″. Linkenauger will conclude his career with seven ACC crowns, the second-most individual league titles in school history behind Shawn Crawford’s nine. Koontz was seventh in the high jump at 6’6.75″, scoring two points for the Tigers in that event.

Koontz again got off to a strong start in the decathlon. He won the high hurdles portion with a time of 14.52 seconds. Feathers was also strong, posting a third-place time of 15.15. A native of Grand Island, NY, Feathers was second in the discus on Friday after a throw of 125’0″. Koontz placed third in that event at 122’11”. He had the third-best mark in the javelin, but finished with a time of 4:53.88 in the 1500m portion of the competition.

In the 200m dash, both Ford and Padgett qualified for Saturday’s final (2:50). Both sprinters posted regional-qualifying times as well. Padgett ran a personal best at 21.06, while Ford won his heat with a time of 21.08. Corey Brown just missed qualifying for finals in both the 100m and 200m.

Koontz’ busy day continued in the individual 110m high hurdles, separate from the decathlon. He posted the third-best time of the afternoon at 14.37, qualifying him for Saturday’s final at 1:30 PM.

Andrew Porter continued his momentum in the 400m hurdles by posting the fastest time in the prelims at 51.66 seconds. The reigning ACC Performer of the Week from Budd Lake, NJ had a personal best time and will compete in Saturday’s final at 2:35 PM. Travis Swaggard was ninth, one spot short of qualifying for the finals.

Itay Magidi, three-time All-ACC performer in the event, was unable to compete due to an injury.

George Fields earned his second straight All-ACC honor outdoors and his third overall. He had a season-best leap of 24’6.5″ and is now qualified for regionals in the long jump. The indoor champion in that event was runner-up Friday afternoon to Dexter Adams of N.C. State.

The meet concludes Saturday with the finals of the running events and the competition for the triple jump, pole vault, and shot put.