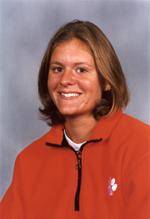 Coin, the seventh-seeded player in the tournament, upset the tournament’s number-one seed, Kate Pinchbeck of North Carolina, by a score of 7-6(5), 6-2 in the championship match. Pinchbeck was ranked eighth in the ITA’s preseason poll, while Coin was ranked #92.

Coin won six singles matches en route to the tournament championship. She defeated Kentucky’s Shannon Stough, 6-2, 6-1 in the first round and North Carolina’s Kendall Cline, 6-1, 6-2 in the second round. Coin won a 6-1, 6-1 decision over the tournament’s ninth seed, Katie Granson of Duke, to advance to the quarterfinals where she upset the tournament’s number-three seed and 27th-ranked Marlene Mejia of North Carolina, 6-0, 6-3. In the semifinal, Coin defeated 10th-seeded Nathalie Roels of Kentucky by a score of 3-6, 6-2, 6-1 to reach the championship match.

Coin will compete in the Omni Hotels/ITA National Indoor Championships on Nov. 7-10 in Dallas, TX as the champion from the Southeast Regional.