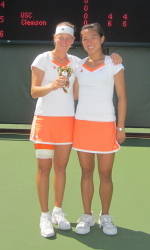 Bek and Wong are ranked No. 1 in the nation in doubles according to the ITA.

The Tigers were admitted to the Championships after winning the ITA Carolina Regional over Beatrice Capra and Ester Goldfield of Duke, who also earned an at-large bid into the tournament.

Bek and Wong are 8-2 on the year so far, and are searching for their first national Championship. They finished as the tournament’s runner-up last year, dropping a match in the finals to Allie Will and Sophie Oyen in three sets.

The Tigers will play Nicole Bartnik and Crystal Leung of Columbia on Thursday at 9:00 am, and if they win will play Friday. The finals will be held Sunday.