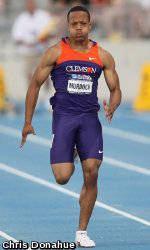 CLEMSON, SC – The Clemson track & field program will host the Orange & Purple Winter Classic on Saturday, the first indoor meet of the 2011-12 season for the Tigers. The meet will begin with the shot put at 11:00 AM, followed by the first track event at 12:30 PM at the school’s indoor track complex.

Several schools in the Southeast region will be in town competing Saturday. Clemson will field student-athletes across multiple events, but most will not be competing in their top event this early in the season. The first running event will be the preliminaries for the 60-meter hurdles. Other running events scheduled Saturday include the 60 meters, 300 meters, 500 meters, 1,000 meters, mile and the 4×400 meter relay.

Clemson is coming off a 2011 track & field season that saw the women’s program claim its second straight sweep of the ACC team championships. The women return several key performers this indoor season, including NCAA hurdles champion Brianna Rollins. Clemson also welcomes Stormy Kendrick back to action after she missed the final month of the 2011 outdoor season due to a hamstring injury. In addition to other top returning standouts, Director of Track & Field Lawrence Johnson and his staff compiled the nation’s No. 5 recruiting class according to Track & Field News.

Among the women’s athletes slated to compete Saturday are touted freshmen Dezerea Bryant and Keni Harrison, both high school All-Americans. Both are entered in the 300 dash at 3:15 PM. Rollins will also compete in that event, alongside returning 400-meter All-American Marlena Wesh. Harrison is also scheduled for the 60 hurdles, along with the defending ACC champion in the event, Jasmine Edgerson.

In the field events, Lauren Terstappen and Christy Gasparino will compete in the pole vault at 12:00 PM. Terstappen established Clemson records, both indoor and outdoor, last year as a freshman. Also on Saturday, Brittney Waller will compete in the 20-pound weight throw. She won that event at the 2011 ACC Indoor Championships.

The men’s team will feature several new faces this season and will be without one of its best student-athletes in Miller Moss, who graduated. He was the NCAA heptathlon champion last season. Johnson will look to experienced student-athletes in the sprints and hurdles, such as second-team All-Americans Spencer Adams and Justin Murdock, to help fill the void Moss left behind.

Adams will not run the hurdles on Saturday, but he will compete in the 60 dash at 2:55 PM. Murdock and fellow sprinter Warren Fraser will compete in the 300 dash at 3:35. Clemson’s hurdle entries on the men’s side include Elijah Britton, a freshman from El Paso, TX, and Marcus Maxey, a junior from Athens, GA.

In the field events, Clemson will usher in a large group of freshmen. Jameel Abdul-Mateen (Atlanta, GA), C.J. Davidson (Clemson, SC) are all slated for the long jump. All three are first-year competitors for Johnson’s squad.

In the throws, Cory Thalheimer leads Clemson’s entries this weekend in the shot put. He was an ACC-level scorer last season for the Tigers.