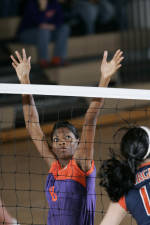 GREENSBORO, NC – Danielle Hepburn, a junior on the Clemson volleyball team, was named the first ACC Player-of-the-Week for the 2007 season after a stellar weekend at the Microtel Mississippi State Classic.

The honor is the second of Hepburn’s career as she earned a player-of-the-week nod once last season.

The Tigers will return to action on Friday, Sept. 7 as they will play host to Florida A&M in day one action of the 17th annual Big Orange Bash.