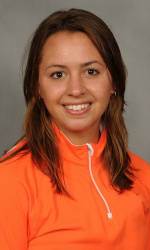 GREENSBORO, NC – Clemson junior Laurianne Henry has been named the Atlantic Coast Conference Women’s Tennis Player of the Week after winning a three-set marathon to clinch the 15th-ranked Tigers’ 4-3 upset of No. 4 Georgia on the road last Saturday. The victory was just the Tigers’ fourth in school history vs. a top-five ranked team on the road.

The results of the match fell into the hands of Henry and the Bulldogs’ Naoko Ueshima at flight five. Henry took the first set 7-6(5) in a tie break, but fell 6-1 in the second set, evening the match. Earlier in the season, Henry had a similar opportunity against #37 Texas A&M, capping a comeback in which the Tigers trailed 3-1. She defeated Sheri Olivier in a long three sets by a 7-5, 3-6, 7-6(4) score to help Clemson advance in the ITA Kick-Off Weekend.

On Saturday, history repeated itself, as Henry took the third set, 6-3, taking the final three games and lifting Clemson to 7-0 for only the sixth time in school history. It was the second win of the week for Henry, who scored a 6-1, 6-2 victory over Furman’s Susan Bitetti on Thursday.

Henry, a native of Anderson, S.C., also teamed with Estefania Balda for a pair of doubles wins in the matches against Georgia and Furman.

Clemson returns to action Tuesday with a 2:30 pm showdown with Charlotte before heading to Madison, WI to take on #8 Southern California on Friday in the ITA National Team Indoor Championships.