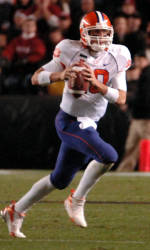 Clemson, SC – Clemson quarterback Cullen Harper and recent enrollee DaQuan Bowers will both be honored by the Greenville Touchdown Club on February 4. Harper will be the recipient of the Banks McFadden Trophy as the college football player of the year in the state of South Carolina. Bowers will be the recipient of the Dan Foster Trophy as the state of South Carolina’s high school player of the year.

The banquet will be held February 4 at the Brookwood Community Church. For more information contact Joel Shaw at joelshaw510@aol.com.

Harper quarterbacked Clemson’s offense to a 9-4 season, the most wins for the Clemson program since 2003. He established 22 Clemson records in his first year as a starter, including single season marks for touchdown passes (27) and TD/interception ratio (4.5). He threw for 2991 yards, the second highest figure in Clemson history and completed 65.1 percent of his passes, also second best in school history. He led the ACC in passing efficiency with a 141.0 figure, just the fourth Clemson quarterback in history to lead the ACC in passing.

Harper, who was fourth in the nation in interception avoidance this past season, will be the seventh different Clemson football player to win the award that is named after former Clemson great Banks McFadden. Gaines Adams won the award for 2006. Harper is the first Clemson quarterback to win the award since Charlie Whitehurst in 2003. Anthony Simmons won the award twice, 1996 and 1997.

Bowers was elevated to the number-one overall ranking among high school seniors by ESPN.com last Wednesday, the first Clemson player in history to be ranked as the number-one player in the nation by any recruiting service. He led Bamberg-Ehrhardt High School to an 11-2 record this year by recording 97 tackles on defense, including 33 tackles for loss and 14 sacks. On offense, the 6-5, 270-pounder rushed for 1219 yards and 19 touchdowns and also caught two touchdown passes. He blocked seven kicks.

Bowers was named the Gatorade Player of the Year for South Carolina and was a first-team all-state selection by The State Newspaper. In addition to his number-one player ranking by ESPN.com, he is ranked as the number six player in the nation by Scout.com and is seventh by Rivals.com. He finished his career with 37 sacks and 90 tackles for loss, and started 50 consecutive games for Bamberg-Ehrhardt. He was the Silver team MVP in the Under Armor All-American game in Orlando, FL on Jan.5.