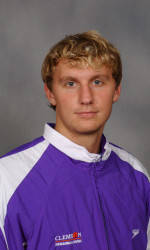 GREENSBORO, N.C. – Clemson’s Adam Farnham and Virginia Tech’s Kaan Tayla and Sara Smith have been selected Atlantic Coast Conference Swimming and Diving Performers of the Week with Farnham and Tayla sharing the men’s accolade. The league weekly honor is a first for Farnham and Smith this season, while Tayla receives his second recognition.

Farnham was instrumental in Clemson’s 174-126 upset victory of No. 25 Florida State last Saturday, as the senior collected two individual victories and swam on two winning relay squads. He captured first place in both the 100 and 200 butterfly, with his time in the 100 fly less than one second off the NCAA “B” qualifying mark. The Mt. Berry, Ga., native also participated in two team events as the 200 medley relay won in 1:30.77 and the 400 freestyle relay unit turned in a first-place finish with a season-best time of 3:02.17.

The Clemson swimming and diving teams will compete at Gardner-Webb at 6:00 p.m. on Friday and will wrap up the regular season as they play host to Duke on Saturday at 1:00 p.m.