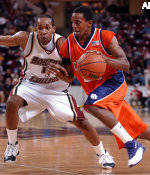 CLEMSON, S.C. – Clemson men’s basketball freshman Cliff Hammonds was named the ACC Rookie of the Week after his performance in the Tigers’ 73-55 win over Charleston Southern. The guard from Cairo, GA, was perfect from the floor, hitting all five of his shots, including four from three-point range. He tallied 14 points with five rebounds, three assists and two steals in 27 minutes of action against the Buccaneers. In the last four games, Hammonds has had the hot hand connecting on 76.2 percent of his shots (16 of 21), including 80.0 percent from long range (12 of 15). With this week’s honor, Hammonds became the ninth Tiger in school history to earn multiple rookie of the week accolades, and the first to do so since Vincent Whitt in 1997. Other former notable Tigers who were multiple ACC rookie of the week selections include Tree Rollins (1974), Skip Wise (1975), Grayson Marshall (1985), Greg Buckner (1995) and Terrell McIntyre (1996).

The Tigers return to action on Tuesday at Littlejohn Coliseum in a 7:00 PM matchup with Norfolk State.