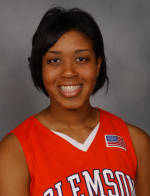 CLEMSON, SC – The Clemson women’s basketball team lost the services of a second member of its squad last week, as senior center Adrianne Bradshaw suffered a torn left anterior cruciate ligament during practice. It was the second season-ending ACL injury for the Lady Tigers this year as fellow senior Tasha Taylor went down in September with the same injury.

“Losing Adrianne is definitely another blow to our program,” said Head Coach Cristy McKinney. “You can’t replace the experience a senior brings to your program. We will miss her on the court but count on her for leadership from the sideline.”

Bradshaw had played in 85 games over her career and averaged 18.5 minutes per game as a junior in 2006-07. The native of Greensboro, NC owned career averages of 4.3 points and 2.4 rebounds per game. She plans to have the surgery in December over the holiday break.

The loss leaves McKinney with just two upperclassmen on her 2007-08 squad in senior D’Lesha Lloyd and red-shirt junior Moreemi Davis.