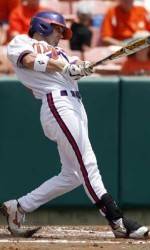 GREENSBORO, NC – Clemson outfielder Wilson Boyd has been named the final ACC Baseball Player of the Week for the 2010 season, while North Carolina’s Colin Bates received the Pitcher of the Week honor.

Boyd, senior outfielder from Hickory, N.C. led Clemson to a 4-0 week, including a three-game sweep over No. 6 Florida State to give Clemson the ACC Atlantic Division co-championship and the No. 2 seed in this week’s ACC Baseball Championship at Greensboro, N.C.

The highlight of Boyd’s week was his go-ahead, run-scoring single with two outs in the eighth inning to give the Tigers a 9-8 win over the Seminoles on Thursday. In four games last week, Boyd batted .571 with eight hits, a homer, double, five RBIs, three runs, four walks, a .667 on-base percentage, and a steal. He had multiple hits in each of the first three games of the week, including two three-hit games, and walked three times in four plate appearances in the final game of the week.

Bates, a senior, wrapped up his last home week as a Tar Heel in tremendous fashion.

Bates anchored a North Carolina which posted a 3.50 ERA and 28 strikeouts to just 10 walks in four games last week. The Naperville, Ill., native pitched six shutout innings of relief to lead Carolina to a 5-3 come-from-behind win over Virginia Tech on Friday. The victory helped the Tar Heels secure a series sweep.

In two appearances last week, Bates notched a 1.23 ERA allowing just one run on three hits while striking out nine.