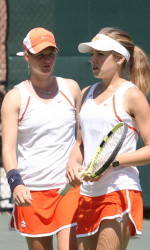 ATHENS, GA – Clemson’s Ina Hadziselimovic, ranked 7th nationally and a national 5-8 seed, defeated #35 Dominica Zaparanza and Michaela Kissell of Marshall in the first round of the NCAA Doubles competition in Athens, GA on Thursday. The Tigers’ 7-6(5), 6-4 win in the first round advances them to the Final 16 of the 32-team field.

In the doubles championship, the players are playing best-of-three sets to six, as opposed to the pro-set format played throughout the dual match season.

Thursday’s match, originally scheduled for 6:30 pm, did not get underway until 7:35 pm, as the two teams waited for other matches to finish. The Tigers withstood two strong rallies from the Thundering Herd duo, but themselves came back from a 5-3 first-set deficit to close out the match at 9:10 pm.

Clemson’s duo improves to 25-8 on the season as a pair, and 12-7 against ranked foes. Hadziselimovic improved to 35-10 individually, while Bek is now 31-12. Hadziselimovic’s mark extends her own school record of doubles wins in a season, and gives her 105 in her career, also a school standard.

The Tigers served first and won the first three games before the Herd got on the board and stormed ahead with the next five games to take a 5-3 lead.  Hadziselimovic was able to right the ship on her serve, as she and Bek held, scoring four straight points to take the game and close the gap to 5-4. The pair then broke to knot the match at 5-5, and held Bek’s serve for a 6-5 lead. During the three game run, the Tiger duo scored 12 of 13 points.

Marshall held their serve to force a tiebreak set. Clemson took the first two points, but Marshall again came back to take a 4-3 lead. However, Clemson responded with a 4-1 run, closing the set, 7-6, with a tiebreak score of 7-5.

In the second set, Marshall held serve to take a 1-0 lead, but Bek and Hadziselimovic took the next three games. Marshall cut the lead to 3-2, but something in the fifth game appeared to click for Bek, and she took it with her as she served in the sixth game. Marshall seemed to have trouble on the returns, and the Tiger tandem took a 4-2 lead.

Marshall wouldn’t go away quietly, despite their backs being to the wall. They held serve after Clemson held a 30-40 lead, and won the point to pull to 4-3, and then broke Hadziselimovic to even that match at 4-4. The Tiger tandem broke back, again giving the serve to Bek for the match.

The Marshall duo hit a volley into the net on the first two points as Clemson took a 30-0 lead. They went on to score the final two points as the Marshall duo struggled with Bek’s service. The Tigers took the game and clinched a 6-4 set win and the match, moving them on to the Final 16.