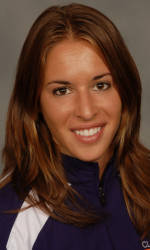 The honor is the third of the season for the top-ranked Mijacika, who received the honor back-to-back the weeks of Feb, 3-10. She has now earned the league accolade seven times in her career. The seventh-ranked Falconi was named Player of the Week for the second time, having also been selected Feb. 24.

Mijacika improved to 26-5 overall in singles and now owns a 19-6 individual doubles record. Mijacika downed 99th-ranked Lenka Hojckova of NC State, 6-3, 6-0 and scored a 6-1, 6-1 win over 51st ranked Sasha Kulikova of Wake Forest. She also played a part in wins at No. 1 doubles in both matches.

The wins were Mijacika’s fifth and sixth straight and her 16th and 17th over ranked opponents. The Makarska, Croatia, native boasts a 14-2 record in dual matches and has helped Clemson to post a 6-1 mark in conference matches with a 16-5 overall record.

The Tigers will return to the court this weekend for their final home matches of the 2009 regular season. Clemson will play host to Maryland on Saturday at 11:00 am and will then face Boston College at 11:00 am on Sunday.