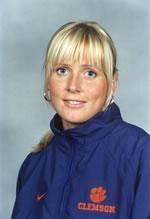 FAYETTEVILLE, AR – The Clemson women’s track and field team completed competition on day one of the NCAA Indoor Track and Field Championships held at the Randal Tyson Track Center on Friday. Silja Ulfarsdottir ran a time of 23.79 in the preliminaries of the 200m dash, but did not qualify for the finals of the event. Gisele Oliveira was slated to compete in the long jump, but did not participate due to an injury.

Oliveira is scheduled to compete in the triple jump at 5:10 PM ET on Saturday. The Lady Tigers’ 4x400m relay team of Ulfarsdottir, Randi Hinton, Shakirah Rutherford and Christina Smith will compete in the final women’s event of the meet on Saturday at 8:55 PM ET.